Thank You for Praying and Thinking of Us 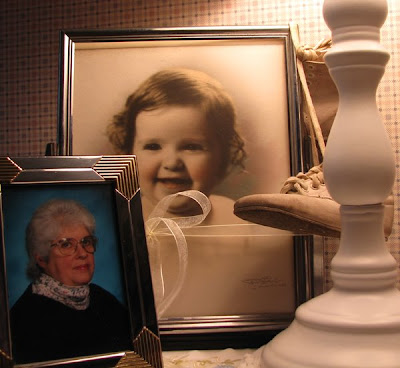 Before anything else, I want to thank you for your prayers and encouragements. I've received such supportive comments, emails, and letters. They are very much appreciated. Indeed, sometimes a fellow blogger offered such insight that I was able to use the information shared to better help and protect my family.

Sometimes Real Life and Blogland walk along harmoniously, but in my world Real Life has become something of the proverbial "train wreck." For that reason, until things calm down again, I am taking a extended break from blogging. I have even considered tiptoeing gently away forever because I simply no longer have the time for blogging or for visiting, which is by far the thing I most miss.

I will share an upbeat thing with you today and then some fine day, when you least expect it, I'll catch you again I hope. Nan, my grandmother, was coming to live with John and me for a season when last we chatted. We still hope for that, but she was hospitalized with a fracture in her back that radiated such pain that for several days she was misdiagnosed with a pancreatitis attack. After five days or so of being in the hospital and having to say goodbye to my mother who was herself heading off to the hospital for cancer surgery, my grandmother was transferred to a nursing home.

It may be that there are wonderful nursing homes, but the one where my grandmother stayed had both John and me concerned. There was a lack of staff and the facility was not clean. My grandmother suffered through over a week of that. Sometimes we were there three times a day just checking. I'm sure that the staff became very weary of our actually taking them up on their 24-hour-a-day policy. There were some wonderful people there, but all it takes is one bad nurse or CNA to negate it all. Nan kept going by looking at my mother's picture above. (I think my mom was about my age now when that photo was taken. Noooo, not the baby picture. Gheesh, you guys are a tough crowd. ;> )

In the meantime, my mother was enduring her own struggles and it soon became apparent that she would be unable to go home without further care and assistance. She was released from the hospital and admitted to a rehabilitation center. She had been there a few days when they told her that there was an open bed if she would like my grandmother to go there. Oh yes, she would. Oh yes, Nan would love to go. Oh happy day. Until...

Friday found us at the car with everything packed and Nan in her wheelchair ready to get in. We heard a call, "Wait!" Apparently, the nursing facility had hit a snag and didn't feel able to deal with my grandmother's needs over the weekend. Unbelievable! I felt my heart sink and a cloud descended over my grandmother that we could actually see. The Word of God says that "hope deferred makes the heart sick." Oh so true.

By Saturday, Nan had been returned to the hospital because her right side was weak. My sister went to be with her while John and I handled yet another family fire. The doctors couldn't find a thing wrong with her and though my sister practically begged them to hold onto Nan over the weekend knowing that she'd be transported to the new facility on Monday, she was released back to the nursing facilty from whence she'd come. Ackkk...

We encouraged Nan to be ready for Monday...eat, get lots of rest, keep her spirits up because then she'd be reunited with my mother. She smiled at us weakly. Her vocabulary dwindled to nearly nothing. Her eyes didn't sparkle anymore. We worry. We pray. John prays for her every time we leave and she thanks him with a tear.

Yesterday morning I made a call to the receiving nursing facility...everything was a go. I called the releasing nursing facility...problems. My grandmother would be evaluated before they could release her and since she appeared to be "unstable" it didn't look good. When I got off the phone, I think I must've looked like a wild woman. My one mission in life was to get two of the dearest women in all the world to me back together again. John was so supportive and he began immediately to pray. Calmness descended and clarity reigned.

I knew exactly what I would say and do with firmness and kindness: Yes, Nan would be leaving their facility. In fact, we would be leaving at 11 sharp. I had already signed release papers on Friday, there'd be no need to sign again. No, she would not be transported by ambulance. We could make her very comfortable in the car. Lots of sweetness and thank yous (even if I didn't feel so much like being sweet nor saying "thank you.")

So we left before 11 am. We drove the 15 miles to the new facility under clear blue skies and bright sunshine. Nan commented on the vividness of the dandelions, the beauty of the lupines, and the fading of the rhododendrons.

Fast forward to her being settled in her room. Lunch had arrived and the nurse was helping her with that. When the nurse stepped aside, there was my mother standing with her walker wearing a big smile. As recognition dawned on my grandmother, her face began to glow and she lifted her arms to gather my mom in. John started to cry. I was crying. It was worth it all for that golden moment.

The last thing I told my grandmother yesterday was that I was taking the first break in a few weeks today. She said, "Why? What are you doing tomorrow?" Cracked us up!

You take care of yourselves and create a wonderful day...
Posted by Vee at 8:43 AM