Recently, my blog was described as "nuanced." Nuanced? Really? Is that a good thing? I do know this...it's an eclectic nightmare, a regular mess, a hodge-podge for certain. I do believe I hear Forrest Gump now... 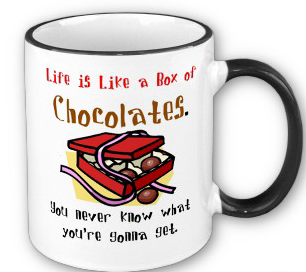 So I've got a few things to share and you really don't know what's gonna turn up. Feel free to hang on to the end or drop off whenever you get bored, 'kay? I promise not to be offended.

First up...have you seen the beautiful, exquisite, omigosh-I-have-never-seen- anything-quite-like-it photography at Down Abbie's Road? You must do yourself a favor and scamper on over there. It'll lift your spirits and make you smile. I promise. (And I don't even like peas.)

Nil Desperandum is one of my favorite expressions. It means never despair! I know that I've spoken of it before, but then it's because I think of it often. I'm thinking of it more often lately. Anyway, one of Brenda's favorite expressions is "Carpe Diem." Sieze the day. And she's written most eloquently about it *here*. You'll be blessed. Oh, yes, you will. 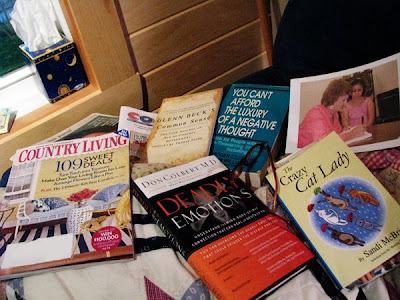 It's been raining here. And raining. And more rain. Drip, drip, pour, pour, flood- the-basement raining. This means that I must follow quiet pursuits and what's better than a cozy corner of the sofa to snuggle up and read an afternoon away? You see some of my reading stack above. Yes, I am reading all of them. Noooo, hahahahah, I have not yet learned how to read them all simultaneously. Silly people!

Do you see my darling Sandi's book The Crazy Cat Lady? It's so much fun to see it in print and to reread all of those favorite posts from Holding Patterns that I love. I have laughed all over again at cats streaking from the forest, Mac's embarrasment over teaching her semi-semaphore, and, oh my heck, what a riot about Evil Sister's antics. Say, and did I tell you that when I turned this book over and looked at the back cover I squealed? Squeeeeaaaaled just like this...eeeeeeeeeeeeeahhhhhhhhhoooooooo...wanna know why? Well, I'm not telling. Go ahead, call me mean.

A few days ago, Sandi posted this picture on her blog. It's from one of her book signings. I hate to gush so, but that's a book signing. This picture has a little something extra added — don't be creeped out — that shadow represents a pat on the back. Sandi, I'm so proud of you! 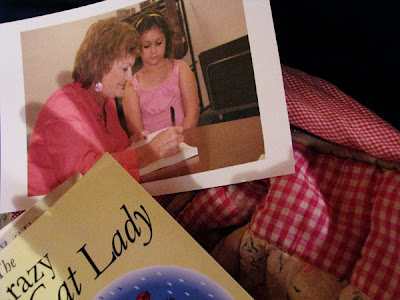 See that turquoise colored book back aways? That's one of my new favorites. We found it tossed on the heap of free books at the flea market two weeks ago. Talk about a God breeze. Thank you, Lord! It's titled You Can't Afford the Luxury of a Negative Thought. I'm going to share just one thing that I have found to be a blessing. (There are many, but this post is getting long.)

I have a few truly disturbing memories. Ones that keep popping up when I least expect them. Sometimes they show up in dream form, but basically they are waking recollections of less-than-pleasant events. What do you do with them when they pop up from time to time? This book shares a technique that I have found very useful: watch the event happen on the screen of the mind just as you remember it. When the tape stops, take out a big black permanent marker and place a big black X over the memory. Then replay it as you'd like to have had it happen remembering that you're the star of the show and it's all about you and it can happen as you want.

I had nothing to lose so I tried it. And it really seemed to work for those painful childhood memories by removing the sting. But wouldn't you know that once you've learned something new, you'll have an opportunity to practice.

Within three days, I had received a nasty note from a family member. It made me want to cry. Instead, I reread it and then played it again on my memory screen. I put the big black X over the whole note and rewrote it in a loving way. Voila! It worked again. No stressing. No fretting. No reliving. I simply remembered doing it the "new" way.

Fine. Within just a few short days, I had yet another "event." My mother was being released from the hospital back to the Rehab Center. Her admitting nurse was checking her back in and going over things when she turned to me and said, "What's the matter with your face? You look so angry right now. Do you have a problem with me or with this facility? I mean it! Your face is saying a lot right now."

Well, I was taken aback as I wasn't aware that I was wearing an angry expression or giving off any vibes. I was, in fact, delighted to be moving my mother back to Rehab. I began to sputter that perhaps I was tired, but that I certainly wasn't angry. My mother piped up and said, "No, she's very happy to have me here."

Later I told John all about it and he suggested that I try my new trick. So I played that memory in my mind and when the tape ended I got out my permanent marker and slapped a big black mustache on that nurse's upper lip. Then I blacked out three of her teeth leaving nice gaping holes.

Okay, so I may need to practice a little more...

Create a wonderful week, my friends. Miss you all!

P.S. Have you read *THIS*? I know that I've already been political this week, but this seems like way too much Big Brother in Government for me and since it involves blogging and bloggers...
Posted by Vee at 5:30 AM