Since Last We Visited or 27 Pictures and a Video Later

Goodness gracious, I have so many photos and stories to share. I think that I'll just dump them all on you at once, sort of like that 27-inch snowstorm that we enjoyed endured last week between Christmas and New Year. 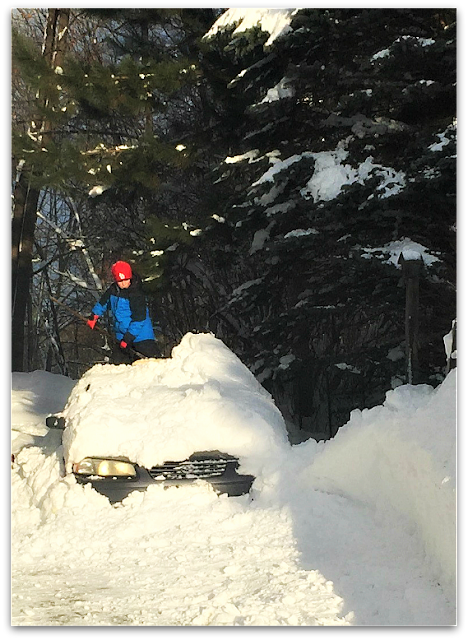 Yes, we put'em to work young here. After a storm, it's all hands on deck. 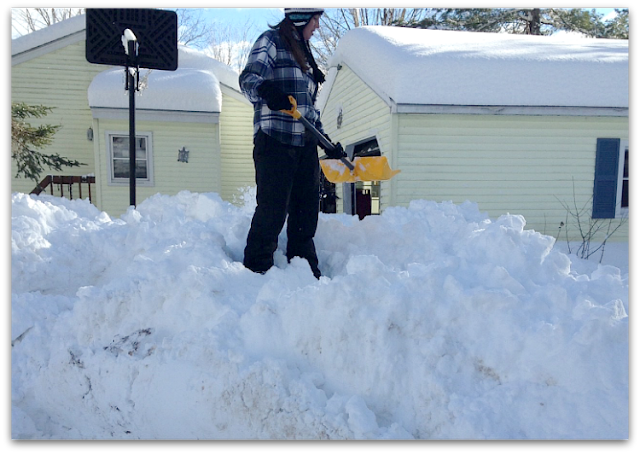 And if a darling daughter calls offering assistance, one does not say, "No thanks, Dear, I've got this." 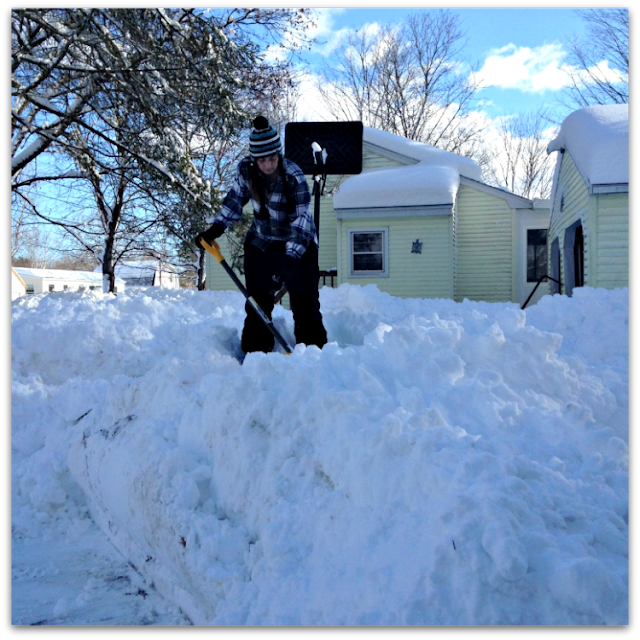 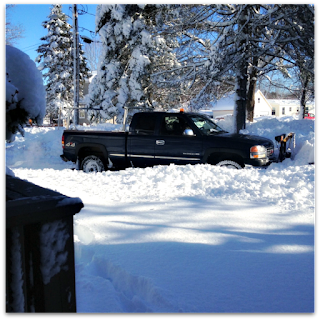 I mean even the plow got stuck in the driveway—twice!

And, while this truck was stuck here; another truck that I had dispatched was stuck at John's place. Nightmare!

So, yes, it was all quite exciting for about five days. No, the storm didn't last that long, but the clean-up did. In fact, still haven't cleared the front steps and that is very important for insurance purposes. I should probably interrupt this post and get myself out there. Nope. It'll have to wait. 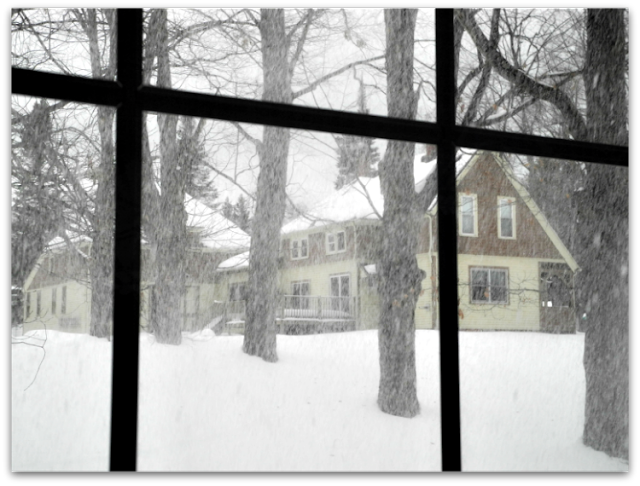 The best thing about snow is that it is all very pretty for a while. 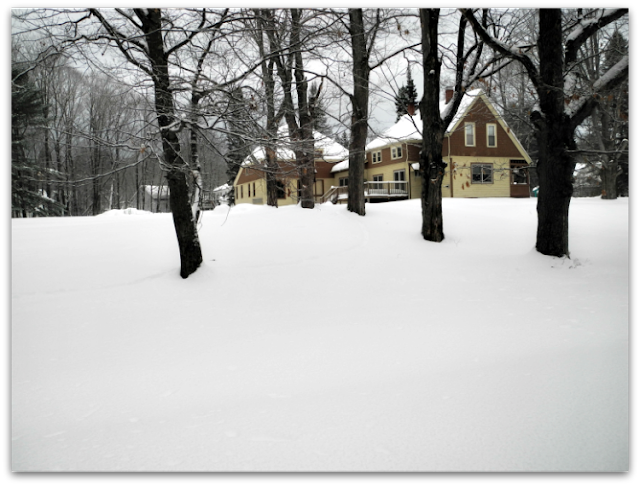 This is not my home. I am IN my home taking a photo of my view. I do love my neighbor's home...just so dearly New England.

Yes, it's all very pretty until... 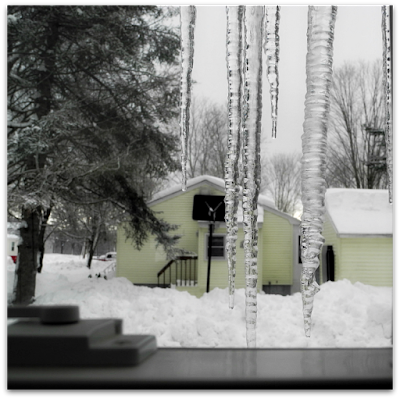 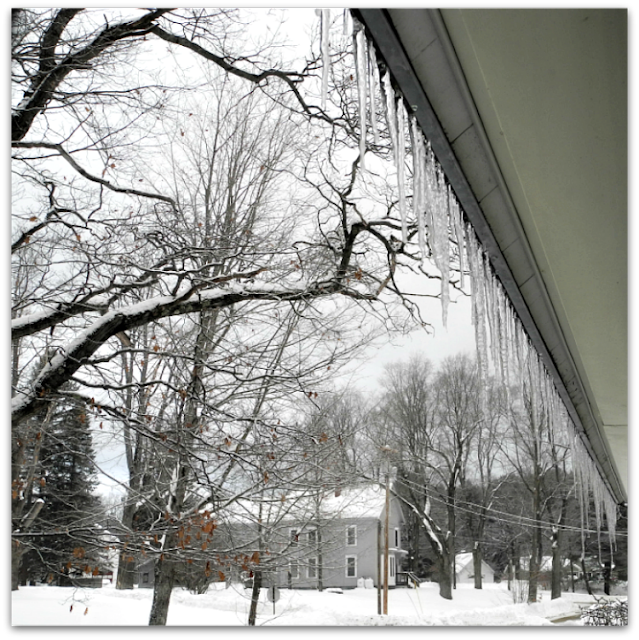 the ice begins to build and then... 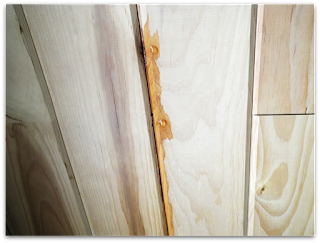 one has a mess of another sort on her hands. I had just checked on this situation the day before yesterday and had hoped that all would be well in spite of all that snow up there. John had told me that he had "fixed" it and that it would "never leak again." I know that he thought that was true, but things can go bad quickly as was the case this time. I spent most of the day yesterday taking care of the disaster in the upstairs bedroom. One of John's friends, also a contractor, came to shovel the roofs and the dripping has stopped for now. I'll spare you the details of this mess as I have other messes to share. ☺

~the roof gets cleared video~

So it's still Christmas here; although, I have been dismantling slowly... 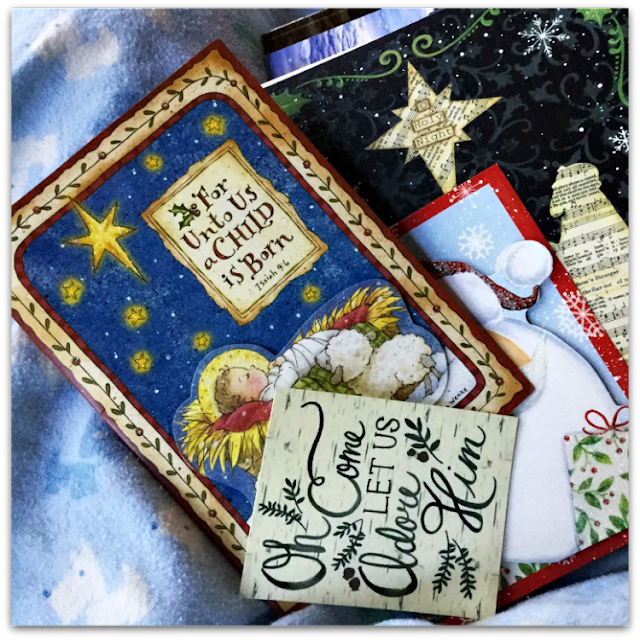 starting with my lovely Christmas cards. I reread each one and took note of changes in addresses, etc. 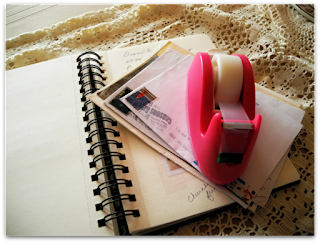 Back on Christmas Day, Laurel (my daughter) opened a cupboard and I heard her exclaim, "I could
not handle that!" I think I saw her wave her hands around in a distinct circle.

What?! What in the world was she talking about? 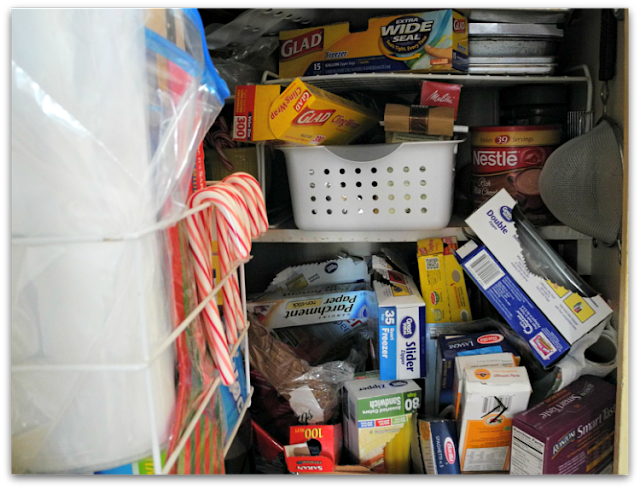 Only three things fell on her feet. I don't think that she had  much reason to complain.

If she thought that was bad, what would she think of what was behind this door? 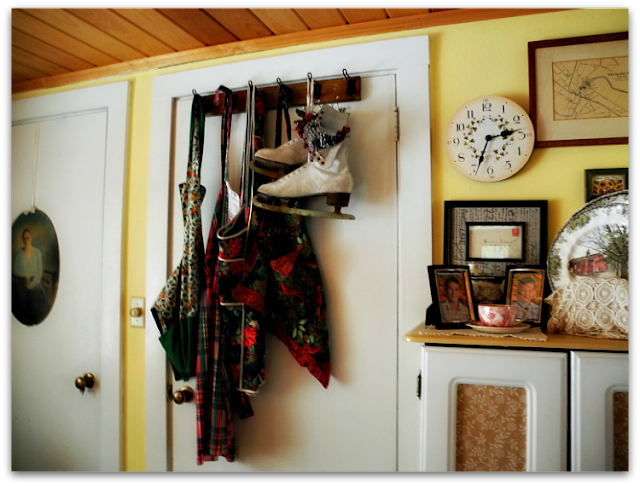 Aside: I think I'll leave out my Christmas aprons for the winter. I hardly had the chance to even use them. 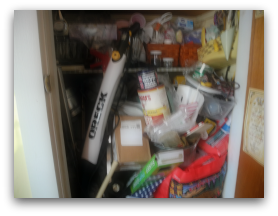 Okay, this was such a mess that I softened it for you. It only took two garbage bags to get rid of a lot of expired and no longer needed things. And I donated an entire bag of rags, too. I don't know how I'm going to live without the dried up caulk tubes, but I'll manage. I also gathered all the pet paraphernalia to give to my sister. Maybe, if she doesn't need it, she can throw it out for me. If someone would just come in here and throw stuff out for me, I could get organized. ☺ 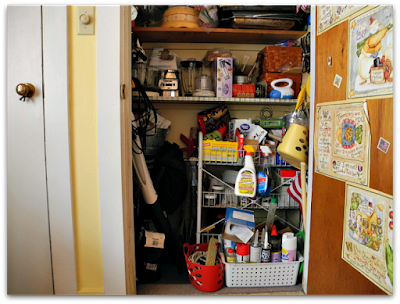 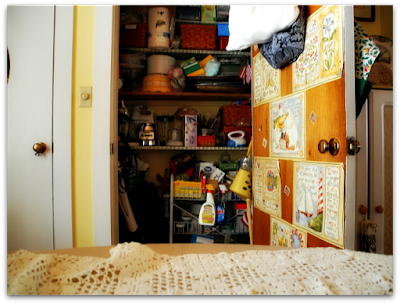 Looks like a giant domestic Tetris game to me. Though I can find things again, I may have to revisit this because, according to FlyLady: You can't organize clutter. I do not, however, consider this "clutter." These are all things that I need, though some things could find a new home in the garage or the basement. I consider cleaning these spaces a money-finding expedition. I found three or four boxes of nearly full Swiffer duster thingies, which I do like. (Yes, I did consolidate.) And I found an extra box of wet mop wipes. And that is not all. 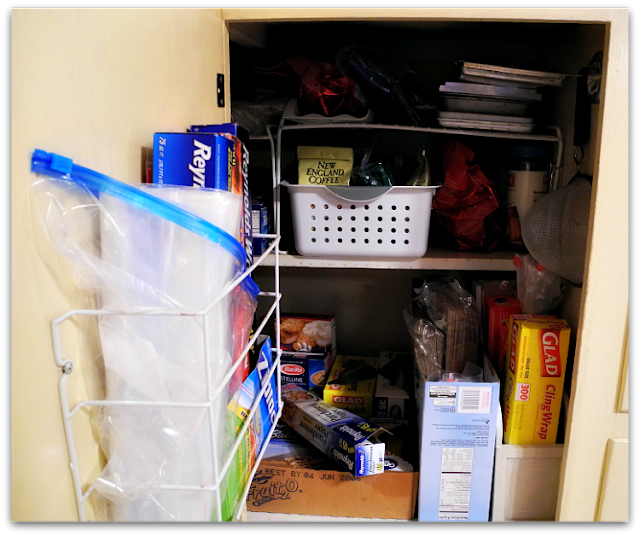 When I cleaned the cupboard that had so offended Laurel, I found several boxes of cling wrap, multiple boxes of freezer bags, two packages of  brown lunch bags, tons of coffee, and all manner of lunch baggies. Apparently, I ran out of plastic bags once and never wanted it to happen again. All that pasta I had down there went except for a couple of packages. One had expired in 2009!

Aside: If you need to scoot, feel free to split; this is getting long. 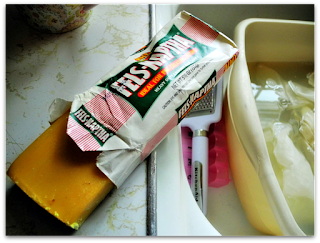 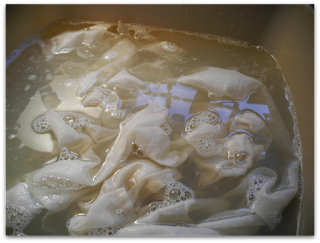 ↑I know what this is soaking in the bucket. I found it in the closet in the dining room. One of you also knows what it is and how I got it. My memory is failing and so, while I am pretty sure that one of you sent it to me as a gift, which one eludes me. For anyone else, hang in there, I'll share what "it" is another time. 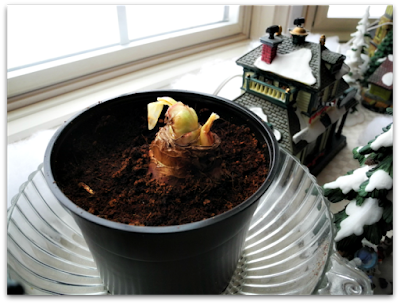 Now I know who sent me this Amaryllis. My cousin Jill did. She wondered how many others would mail me one after my confession that I had never had one on a recent Hodge Podge Wednesday. The sad thing about this plant is that it took a detour before arriving here "at the edge of the world" as Jill calls it. It got a little frostbit and I am just hoping that it will make it. By the way, this is my one and only Amaryllis. No need to change that, I hasten to add. ☺This one requires my full attention.

What else? I know that there is more. Oh yes! Last week, my son Adam and his family came out to visit my father while I was there visiting him for the day. They brought lunch and we had a fun couple of hours chatting. Then I thought to get some pictures of the men in the family. 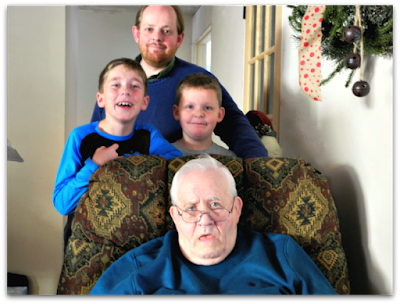 My father is quite capable of being a character and a ham and has never taken a good photo in his life because he's too busy goofing off. I certainly hope that both he AND Jakob are goofing off in this one. Otherwise, I'm going to worry about both of them. 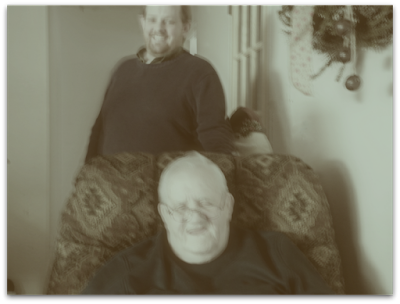 ↑One of my favorite pictures of the day, out of focus and all. 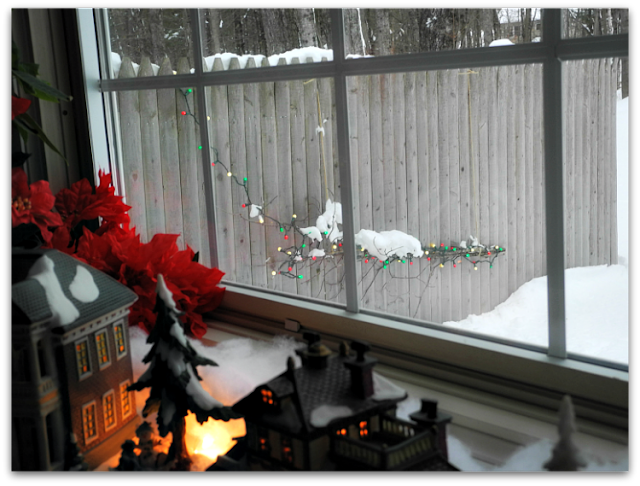 Christmas lights still shining, inside and out... 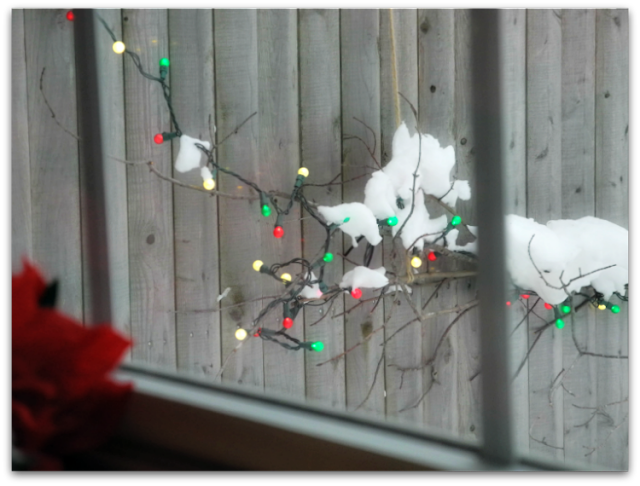 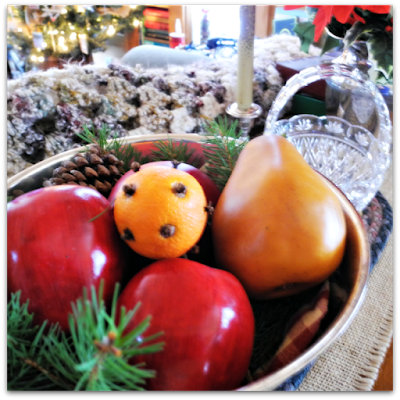 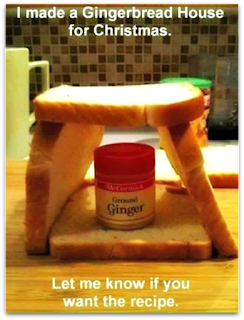 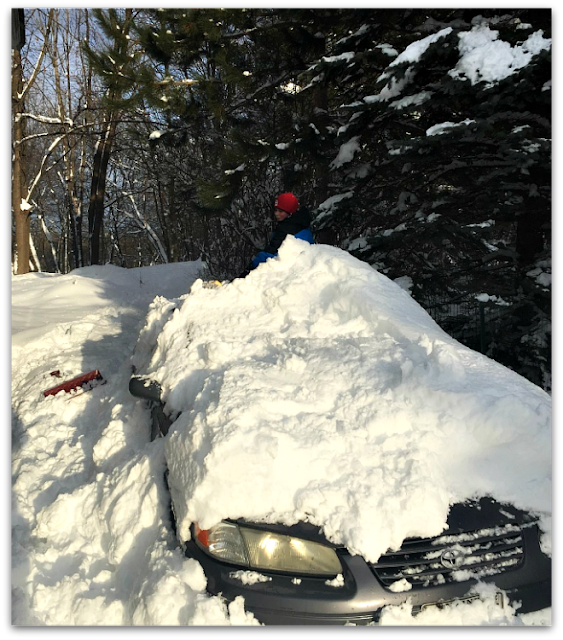 Gosh, I'm tuckered. How about you?