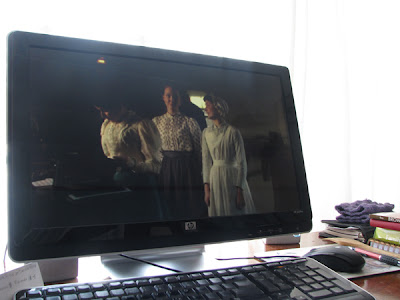 Last week, it was Downton Abbey, this it's Lark Rise to Candleford. (And for several more weeks to come, I'm sure.) I heard about this BBC program all over Blogdom, but didn't pay a lot of attention until reading more about it at the blog I mentioned on the Downton Abbey post. There I found out that I could watch all episodes on You Tube. (If you click on *this,* it will take you to Season 1, episode 1, part 1.) I have happily given myself over to it. I'm somewhere in Season Two and rapidly heading for Season Three.
This is because sometimes You Tube skips an episode or six if one is not really careful so I wound up missing a few in the beginning of the second season and must retrace my steps. It was a happy day when I found *this episode list* and so I've been able to keep myself straightened round. One other bit, the first season does not have the visual quality that subsequent seasons do. It is still well worth watching and is no fault of the program, rather the quality of the upload.
I'm not going to give a lot of background because others have done a better job. Barbara at Ramblings from an English Garden discusses it *here.* I will say this, I had supposed that the title had something to do with larks (birds) rising over Candleford. Hahahahaha... No, no, Lark Rise is the name of a community and Candleford is the name of a community so it would be as if naming your own city or town and adding the next nearest to it. My town and the next nearest to it don't have quite the same ring, but you get the point.
And the thing of all this is that I have sooooo much to do. I really don't have the time for all this Lark Rise business, yet I'm beyond helping myself. So I've decided to dig out the embroidery and at the very least give my hands something to do while watching.

In other news, I am pondering doing something about the "Give Thanks" cabinet. 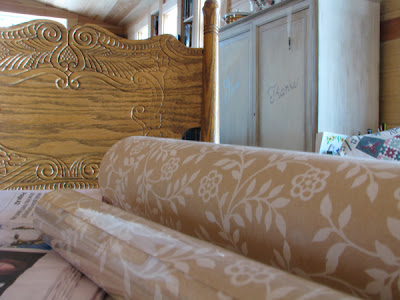 Just thinking mind you, but that's better than a totally empty head. Perhaps next time you find me, I'll have acted upon this idea I have to...
Posted by Vee at 10:19 AM