Broken promises...I have a lifetime full of them and a sewing room, too.

Just yesterday a dear blogging friend told me to watch the mail. Now how many times have I told her to do the same? I'm pretty certain that something is arriving this week; she, on the other hand, has learned that she can't count on me.

I have reasons. The best reason is that my grandmother's little sewing machine doesn't function so well anymore. It skips stitches with abandon. Reminds me of someone I know. Then I thought, no problem, my mother has her trusty Singer in storage.

When I brought it home sometime in May, I cleaned it and tried to find a manual for it, which I was able to do on line the internet being such a great resource, and then realized that it was another skip stitcher, too. Sigh.

Thus began my search for a quality machine and I settled on a little Janome. It came within a week and I like it fine. No skipped stitches. Now where were my projects? Were they in that pile there? In that drawer? That box? That laundry basket? The entire sewing room now had become filled with my mother's abandoned sewing projects in addition to my own. I had many distractions in my wee space for weeks. The potential for getting lost in there is still great.

Finally, just Sunday, when I had decided that television coverage of the 9-11 events in NYC would be totally unsatisfactory (all those talking heads yapping over the top of anything meaningful that was going on and each with his own agenda...ugh), I slipped upstairs to my sewing room where I could be alone with my own thoughts. I began folding fabric and praying. I folded and folded and folded, prayed and prayed and prayed, and came, at last, to a white laundry basket where I found my lost projects. 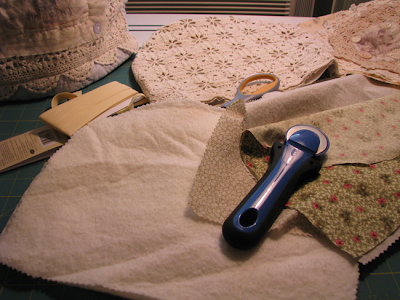 There are three, two good ones and a dud. Odd that they are heading for gals named Sandy. Well, one name Sandy and the other named Sandi. I have no idea if I'll finish them this week. I hope so. I'm tired of skipped stitches.

I have a new kitchen window and as soon as I can take a good picture... my camera has been acting up terribly... I'll post one. There I go again — another promise!