The Rest of the Story

In the summer of 1962, my paternal grandmother and her youngest daughter made for me and my cousins a playhouse in the small barn behind her home. I was most charmed by the white lace curtains at the windows, but there was also a kitchen, a table and mismatched chairs, an old sofa, and a wasp's nest of mammoth proportions.

Perhaps my cousins and I should have learned to coexist with those wasps. Instead, we felt it necessary to clean house. And so it was that on a warm summer morning, after finding a great long stick, we began poking at it...slowly at first and then with more vigor.

The rest of the story goes by in a bit of a haze, but you may imagine three little girls tearing across a back lawn making a beeline (every pun intended) for the safety of their nana's big kitchen. The wasps were in hot pursuit (every pun...oops...used that line already). I remember getting stung over and over. They were trapped in my clothing. What happened to my cousins must have been something similar, though I really don't remember.

All I could think was that everything would be okay when we made it to the house. You may imagine my shock when we were quickly ushered right back out the door. My mother rescued me as best she could, but she could not prevent the stings that had already happened nor could she prevent the final stings even though she had me in hand and was trying.

And that, friends, is the rest of the story...almost.

My grandson was stung when a wasp got trapped in his sock. I think his experience is what brought my own floating back to the surface. My grandson is no longer certain that I should have this on the beam ledge. 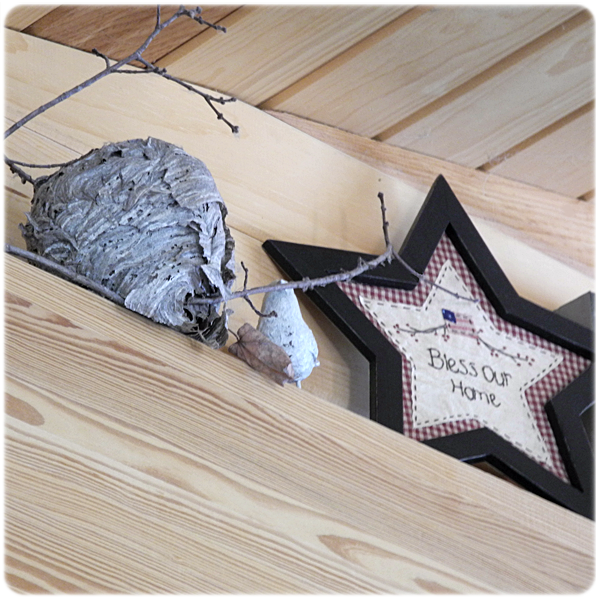 He may be right because wasp nests are very difficult to keep tidy. I think I'll toss this one and look for another. And now I must get back to cleaning house in earnest. (Would you believe that I thought I'd be all finished by this time? Sigh.)

A happy weekend to you...

ETA: John tells me that we have a hornet's nest on the ledge. I was stung by hornets, not wasps. My grandson was stung by a wasp. I think. Don't hold me to any of this. ☺
Posted by Vee at 10:44 AM