Courage is not ignorance of bad weather but persistence in the face of it.

Well this is a fine kettle of fish — A Nor'easter on April Fools Day. How funny — not. Still I plan to keep a stiff upper lip and be as cheery as is possible on such a day.

Yesterday, my sister called in a bit of a panic as she had a doctor's appointment and my father's new care person had not shown up. The Veterans Administration is struggling to keep staff as they simply do not have enough. They're not the only ones as local hospitals are hiring traveling nurses and they come from all over at great costs to fill in the gaps. Something is very, horribly wrong with this picture. No wonder health costs are so exorbitant. It's crazy.

Where was I? Oh, back to my sister. She had no one closer to call on so she called me. I had a few plans that I decided to set aside. There was nothing more pressing that could not wait. I did not want her to miss an appointment when she had waited so long and her schedule is so rigid. I ran some errands, filled the gas tank, and set off for her corner. It was a lovely drive, if I discount the miles and miles of potholes. I thought about taking photos of the things I saw that might interest you, but in the end I was just too lazy. Oh I did take one for the Instagram crowd. Are you jealous? 😉

I stopped at a market and picked up a box of doughnuts. One must not arrive empty-handed. I hadn't yet and didn't want to start. I found that everyone, except my father, is dieting so that wasn't the best choice. Dad and I enjoyed our doughnut all the same and reminisced about my paternal grandmother's delicious homemade doughnuts. No store bought doughnut holds a candle to our memories of them.

Nana would make doughnuts when the mood struck her, which was actually quite often. She would rise early to get much of the work done before we grandchildren awoke.  She would begin by setting the lard in a large heavy iron skillet upon the stove to heat while she mixed the dough. The recipe was in her head and perhaps in her heart as well because those doughnuts were amazing...the stuff of legend. She used an old soup can to cut her doughnuts and she formed the doughnut hole with her finger swinging the dough around and around her finger until it was perfectly shaped. She needed no fancy thermometer to know when the fat was ready. She would slip each doughnut into the fat with hardly a  ripple; she had no fancy tongs so she used a simple fork to first turn and eventually lift the doughnuts being careful not to poke them. A paper bag was used to line a rectangular cake pan that served as the receptacle for the browned doughnuts fresh from the fat.  If we wanted sugared doughnuts, we would put some sugar in a paper bag, pop a couple of warm doughnuts in and shake the bag. I have been known to eat a dozen doughnuts all by myself. *hiccup* These memories were the gist of our conversation.

When my brother-in-law arrived home early from work, he fixed the broken mirror on my car. It was one of the things that had been on my docket for the day. And he did it for free! It was worth the trip! That and the sweet memories about homemade doughnuts. 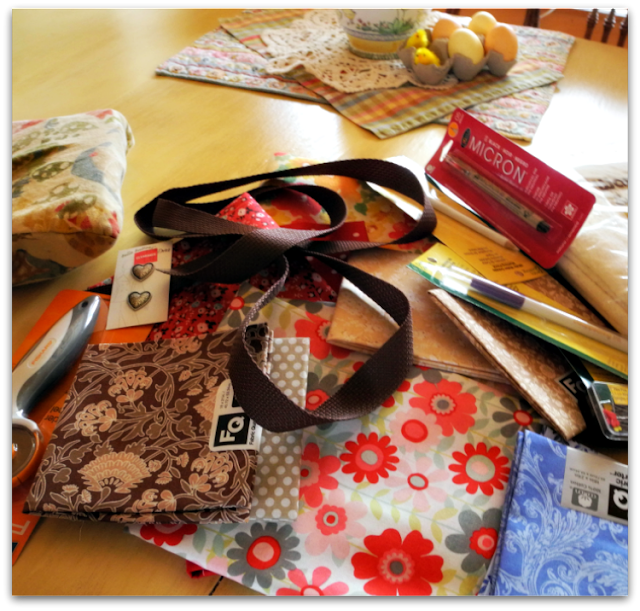 On my way home, I decided to use my Joann's coupons. I loved hearing the clerk say that I had saved $48 dollars. We shall not discuss how much I spent to save that. I bought a few more fabrics for making a few more bowl cozies. It's my plan for this day while the snow falls. A cozy day in my sewing room making cozies...how cozy!  Cozy, cozy, cozy...are you believing any of this? 😜

I certainly hope that it is not snowing in your corner, but if it is, feel free to tell me all about it... 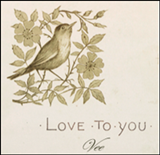 ETA: The snow totals have changed in my corner from 8 to 18 inches to 3 to 5 inches. Ahhhh,,,much better.
Edited to Add Again at 7:30 am: One can't trust those weather people. At. all. Our original snow totals  are going to prove correct by the time this event winds down at the end of the day. Heavy wet snow expected all day long. 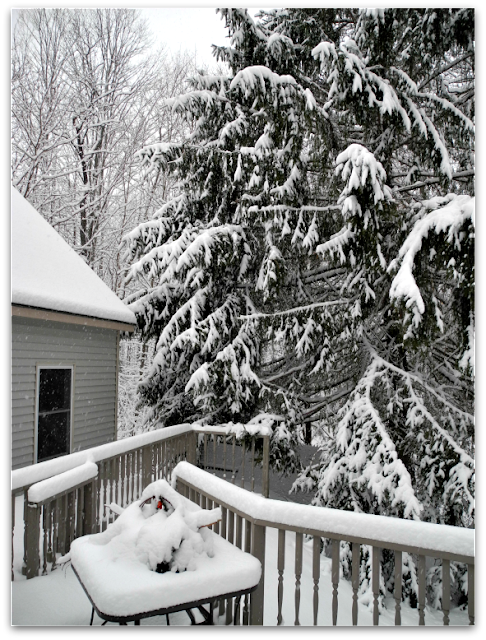 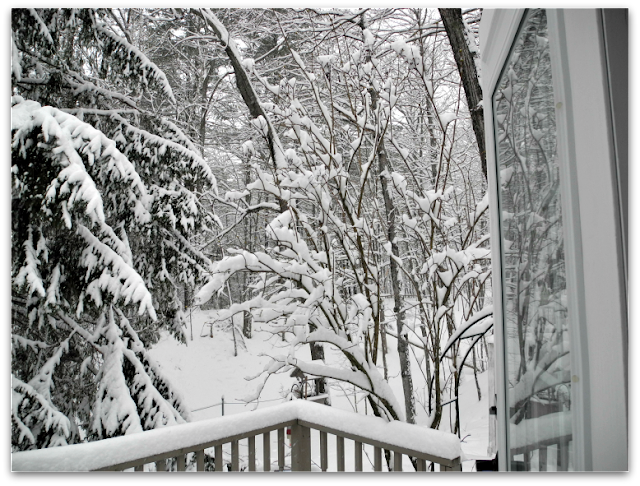 No visible tree creature horse today!
Posted by Vee at 1:30 AM