A Vulture Story and More 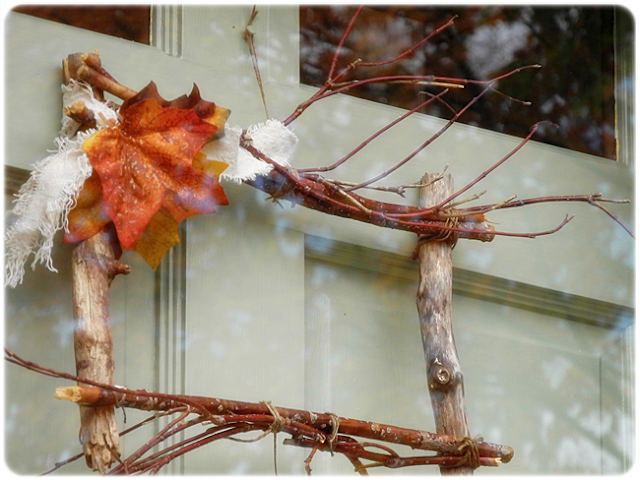 Who could possibly imagine the excitement that goes on behind this front door at this unassuming home on a quiet street in a sleepy village well into October? 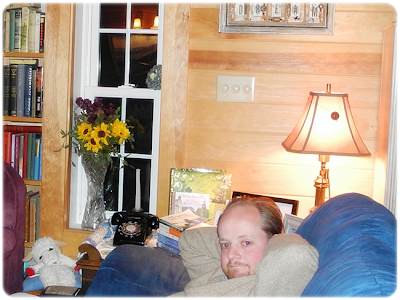 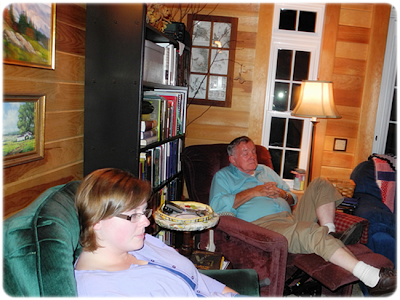 John has joined Lamb Chop in coma land. Michelle is still awake, though! 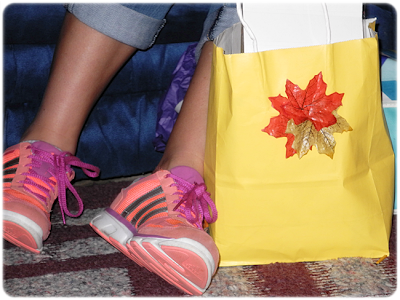 Even the birthday girl was relaxed. It was all so very dull that I suggested to the grandsons that we go out and scare off the vultures. 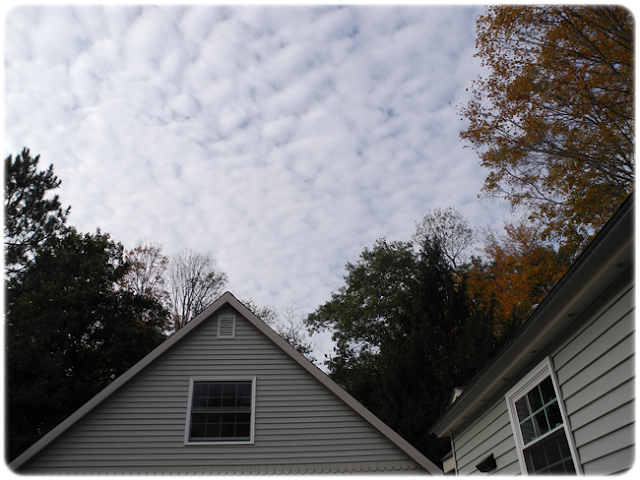 Just the day before I had seen that vultures had been encroaching once again. See them? 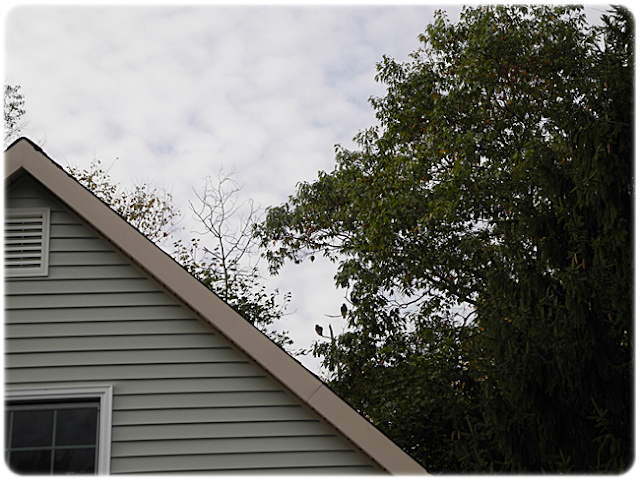 There! To the right of the roofline! 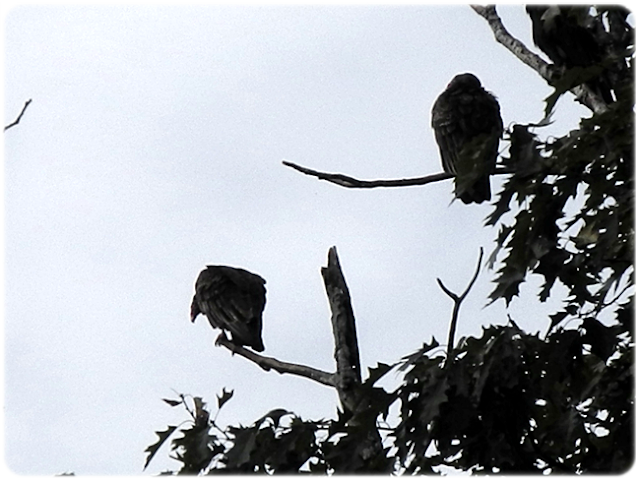 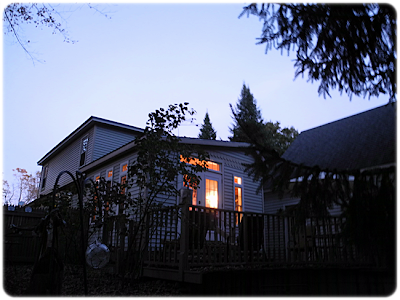 So in the early evening, while it was still a little light, I had taken my camera, set the flash, and had gone down to disturb the vultures roosting. I have proof that they were mightily disturbed; unfortunately, it might also reveal that I am mightily disturbed as I was doing a regular Mexican hat dance down there at the forest's edge. I'd show you the video, but you'd be ill in seconds with all the stomping, flailing, and swishing about. Swishing...remember that word. 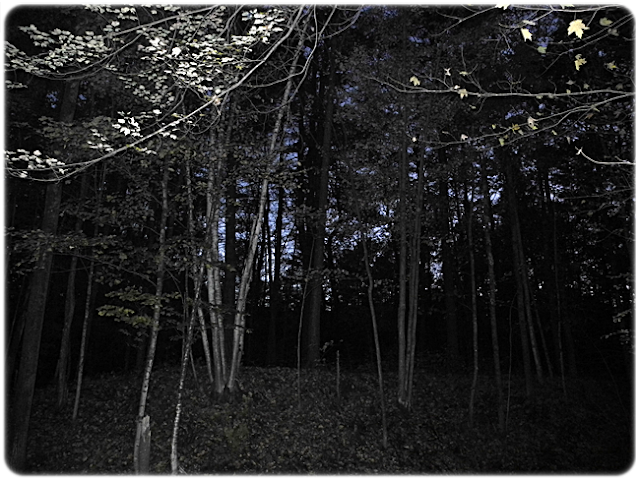 No evidence in this photo that they were there, but they were definitely there...fifty or a hundred...freaky vultures! 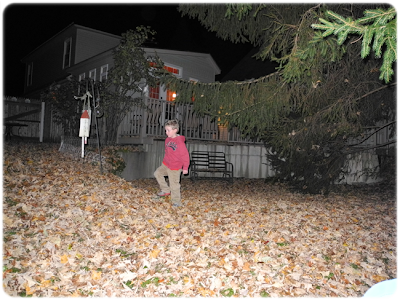 Back to the night in question — the grands couldn't wait to join me! They were all for going out after dark, way after dark as you can see above. 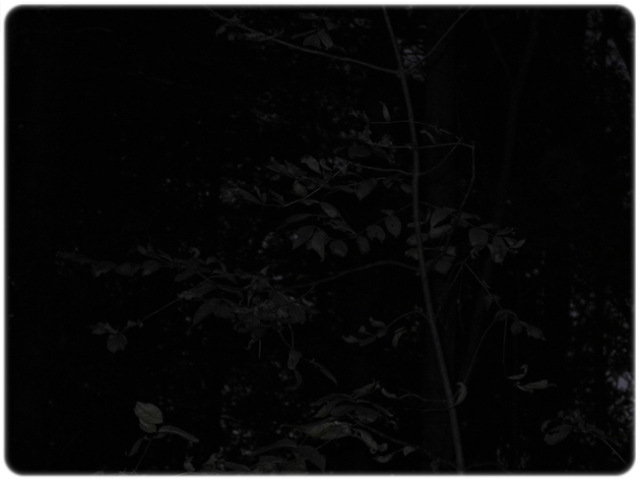 It was pitch black out there. No amount of flailing, Mexican hat dancing, or taking flash photos could rouse those vultures. After a few minutes, Sam whispered, "I can hear someone swishing and it isn't us."

We stopped to listen. Sure enough, there were footsteps on the lawn above and beside us. I thought it must be my neighbor out with his dog. Sam said, "I'm going to go see." I took another photo or two when Sam said, "There's a man dressed in white and he is staring at me."

Now that got my attention. Jake had decided to go in so I went up to stand beside Sam where I peered into the darkness. Sure enough! There was a man dressed in light clothing all softly outlined against the night.  I said, "Well say 'hello.'"

Sam said, "hello." Nothing. The man stood perfectly silent not sixty feet away. I don't think he was my neighbor.

Creepy. We decided to go in ourselves at that point. When we tumbled through the patio doors, telling our story, John
said, "Shhh...Don't talk too loud. The window is wide open." Ackkk!

Needless to say, we won't be out chasing the vultures away any time soon.

A Blessed Thanksgiving weekend to my Canadian friends!
Posted by Vee at 8:50 AM