This morning, after a blueberry pancake breakfast, we (I) decided that the bay window needed to be washed. John says that "we" decided this having a week of spare time to devote to it. Wry grin.

Can I just say that Pella windows stink? They may look beautiful, but they are so poorly designed that the average housewife would n.e.v.e.r. be able to operate them to clean them herself. So, if you are considering new windows, may I suggest Harvey ones? I love my Harvey windows! 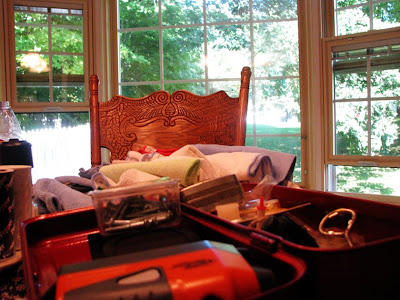 So the morning begun so beautifully with devotions and blueberry pancakes has become funked up with the blue air of my fussing and fuming. Gentle groom is discouraged, but not utterly downcast. That would be moi.

Yup, it's enough to give one a pain in the neck. If I need traction, though, I know where to find some. John's interfacet injections didn't work so the doctor suggested traction twice a day. So far that seems to have worked the best.

Oh, for those who worried when John's picture was removed from below the Schmoopy Playlist...John hated that picture. He always complained that it looked as if he were sleeping. Sigh. I loved seeing it. It's okay, though. I've found another that I like pretty well. 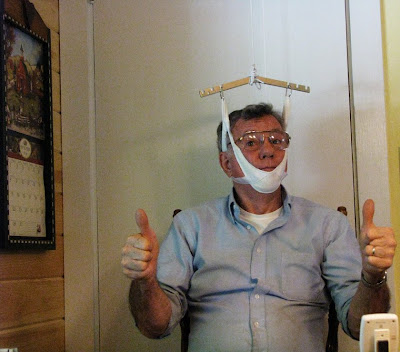 Hope that you are having a far better start to your week than I!
Posted by Vee at 10:38 AM