The air is chilly. It's going to rain. It will not be a perfect autumn day out of doors, but it will be as perfect as I can create indoors. 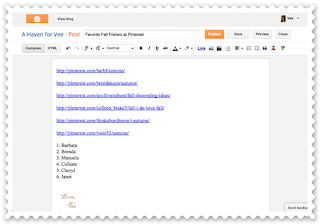 This little photo to the left represents hours spent at Pinterest perusing other gals' Autumn or Fall Boards. I was going to provide a link to each of them and then realized that these are the sorts of things we did before Pinterest, but not so much now. Instead, I created an Autumn Board of my own using so many of my friends' pins. What delights you have been gathering! There's enough inspiration there to last for years.

Some weeks ago now, I promised John a batch of cookies. I don't know about you, but I do not like baking cookies. They take so long to bake with all those 10–12 minute interruptions. ☺ He doubtingly asked when. I said that it would have to get much colder.  Now he's been watching for frost warnings like crazy. Just last night, as I was reading the final pages of *A Fine Romance, he said, "It's going to be 28° tonight."

I slapped my book shut and started up from the chair. Those were action words and I had some gathering of plant covers to do. He started to laugh and then had to confess that he was lying just to get some cookies. What a scamp! I think he wanted to know if I could still move. I've had my nose in one book or another for days.

*Speaking of A Fine Romance, I linked to two blogs at the end of my post on Branch and Hedgerows where the blessed gals went to book signings, if you'd be interested. Both gals had their photos taken with Susan and one even found Joe in the parking lot in that beautiful van of theirs. He seems like such a good sport!

I'd just like to add that finishing the book may have given me the same sort of feeling that Susan and Joe had about leaving England behind. I'll be leaving it handy by so that I can dip back in again and enjoy whatever page I land on. It's that kind of a book.

Now if I were to bake John some cookies today, what would you suggest?