Depression and The Scent of Water 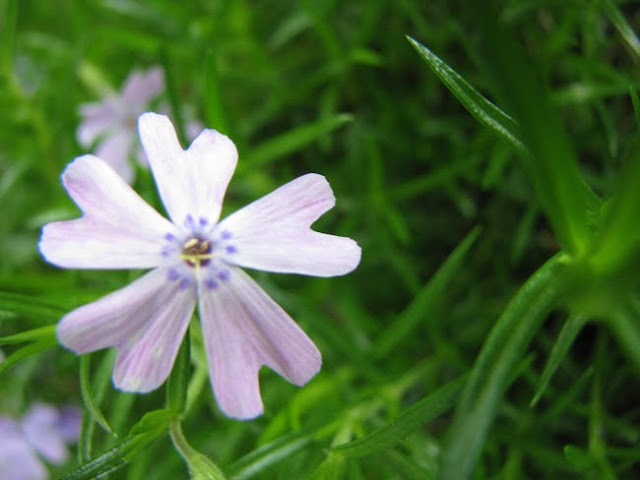 After the rain, the flowers were so beautiful and that fresh scent of green things and earth filled the air.

As one who has watched depression/mental illness affect my family, I find myself fearing the affliction. It snakes its way through both sides of the generations of my father's family. This form of illness can be hereditary and no generation has completely escaped. Of those family members who are ill, some live more or less successfully and others struggle. Some fail. Miserably. Heart-achingly. This is true of each generation we (the family) know of.

Yes, I have feared it. It is a thief and a robber. Sometimes I've looked back and panicked for there has been a lot of pathos; sometimes I've looked ahead and crumbled. I've worried about the generation behind me and the generations ahead of me and I have worried about those beside me. Silly me. There is always something to worry over, but we're expressly told not to give in to fear and worry.

That's why reading Elizabeth Goudge books and especially The Scent of Water has meant so much to me. Elizabeth Goudge herself was no stranger to depression. She shares marvelous insight and comfort with her readers. Her overall message is one of hope. But not hope for hope's sake alone, rather a placing of one's very life in the hands of God where "there is always a way of escape so long as it was to the heart of it, whatever it was, that one went to find Him." p170

The characters of The Scent of Water are many. They exist in the past, the present, and the future. Goudge has many writer's tricks up her sleeve, but I never felt that her story was machinated, well crafted, but not cranked, if you know what I mean.

Finishing the story, I was surprised that Goudge had not used this very familiar verse: God has not given us the spirit of fear, but of power, of love, and of a sound mind. II Timothy 1:7

Instead her theme verse was one from Job:

For there is hope of a tree, if it be cut down, that it will sprout again, and that the tender branch thereof will not cease. Though the root thereof wax old in the earth, and the stock thereof die in the ground; Yet through the scent of water it will bud, and bring forth boughs like a plant. Job 14:7–9

This verse is all the better for it gives hope to those who have already suffered with depression or mental illness. It says that there is hope for renewal. Depression is usually not a choice one makes. What it is is a chemical imbalance in the brain no more a person's fault than if he broke his leg by being hit by a truck. Rarely is it a desire to wallow in misery, wrapping oneself up in sorrow and shutting oneself off from others on purpose no matter what the pastors say.

If you or anyone you know deals with such things, Victory Over Depression by Bob George has been especially helpful and instructive. And I'd also like to say that medical science has come a long way and there is no need to give mental illness more power than it has. The giving of that power has happened in my own family and it has caused some to run and hide rather than to run and "find Him." Proper medication is a very good thing. Being willing to yield to the good judgment of loved ones when one's own is impaired is vital. Pride is most definitely an issue where mental illness is concerned. People do not want to admit that they may be in crisis. As Goudge writes: "I can't talk to people because this illness isn't like other illnesses; all that's worst in it you have to keep buried so as not to distress people, for you must not spread fear." p110

(Some fine day, perhaps I'll write about the nightmare that is mental health care in this country and why it is next to impossible to get anyone help and what perhaps can be done to change it.)

I never thought I'd be writing about this topic here; it's a good thing that I'm putting it on a Sunday post where no one needs comment. ;>

Let us remember to run to the Lord and not from Him...