If you haven't had the chance to watch or don't wish to be spoiled, please close the door quietly on your way out.
~~~ 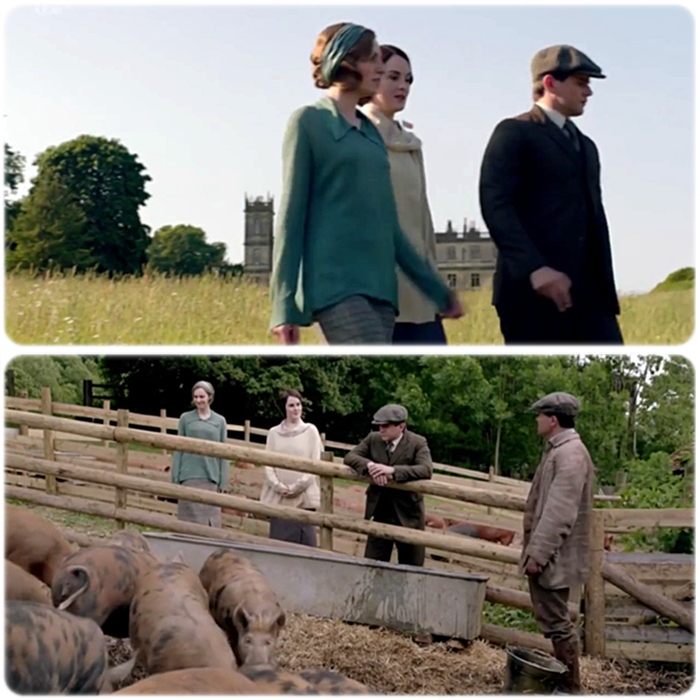 The future of Downton Abbey rests with "the kids" Edith, Mary, and Tom, those pigs, and probably with the farmer Mr. Drew there as well. Great foreshadowing here. And that's all I'll say about that this week. 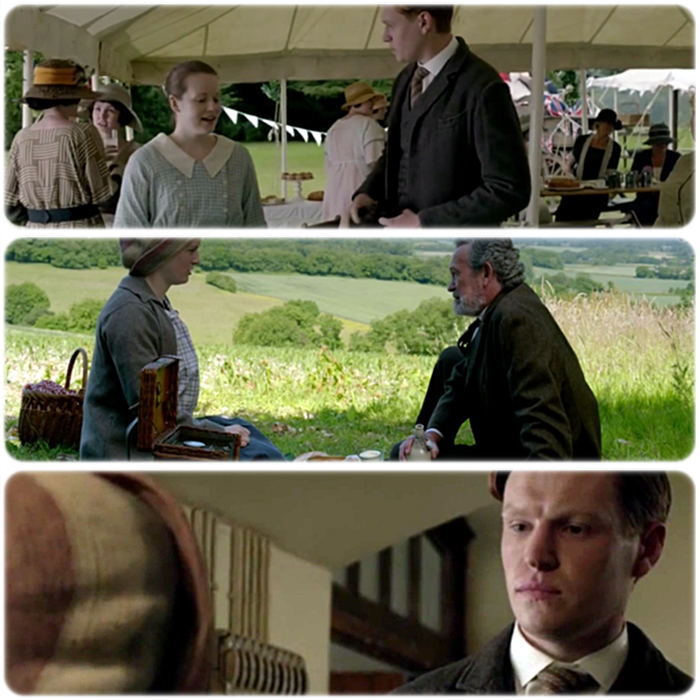 I had really hoped that Daisy and Alfred would get together, but he's leaving both Ivy and Daisy as friends. In the end, neither would have him. Ivy says that she doesn't want to be tied down since she doesn't know what the future has in store causing Mrs. Patmore to exclaim, "You're an optimistic generation."

Daisy says, "I loved you, Alfred — it's time for you to go your way and me go mine. Friends forever."

Wasn't the advice that Mr. Mason(Daisy's father-in-law) gave her wonderful? Someone ought to write it down! Okay, talked me into it:

There won't be too many people you love like this in your life and he is one. You need to say goodbye without anything jagged between you.

And that moment between Mrs. Patmore and Daisy...precious.

But these are the little stories compared to the others. The biggest one will be whether Bates killed Green by pushing him in front of a bus, but more on that later.

The one with the longest repercussions for Downton Abbey and the Crawley family will be the story of Edith and her baby. 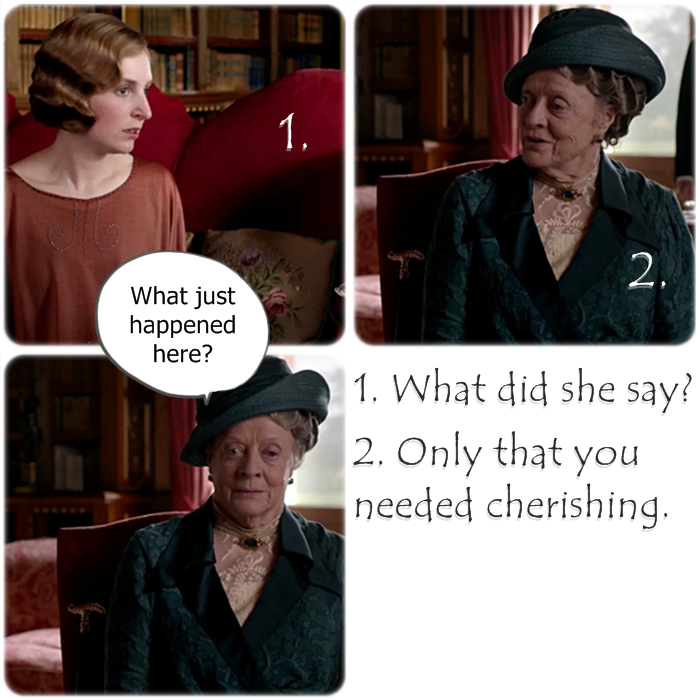 What did you think of the story that Edith and Aunt Rosamund came up with? Clever what? Hahahahahha... They'll be heading off to Switzerland to learn French. Talk about adding a bit of levity. To Edith's credit, she would like to keep the child with her in Great Britain to be raised locally; she's not sure that a Swiss upbringing would be right. Her grandmother objects saying that Switzerland has everything to offer except conversation.

So much to discuss here, but I'll leave some for you to pick up! I do have to hand it to Violet for being perceptive and facing the facts head on. It's more than we can say for poor Cora who goes blithely on unaware with a "Golly, life's full of surprises!" 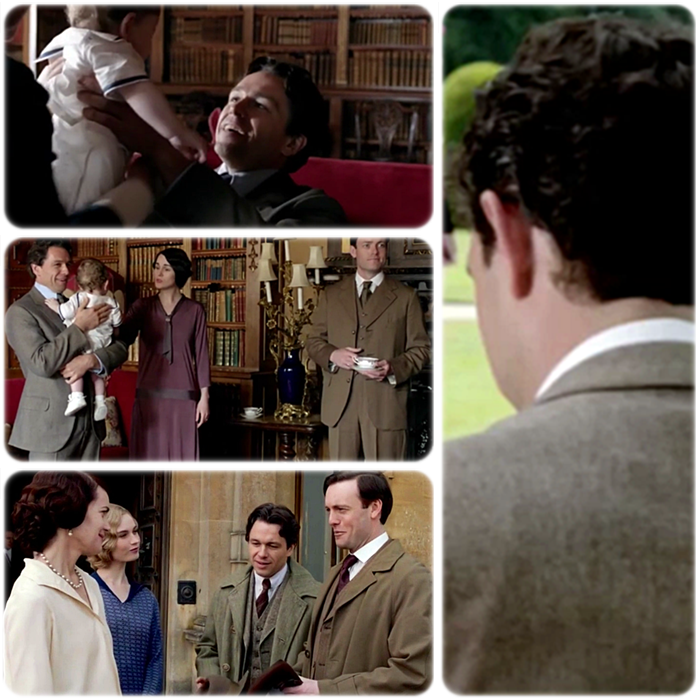 Did you love the collective noun for a group of suitors? A Desire of Suitors? And there is much ongoing interest in Mary's group of three thus far: Charles Blake, Evelyn Napier, and Lord Gillingham. Is Fellowes pointing to Blake who seems to be quite handy with little George? 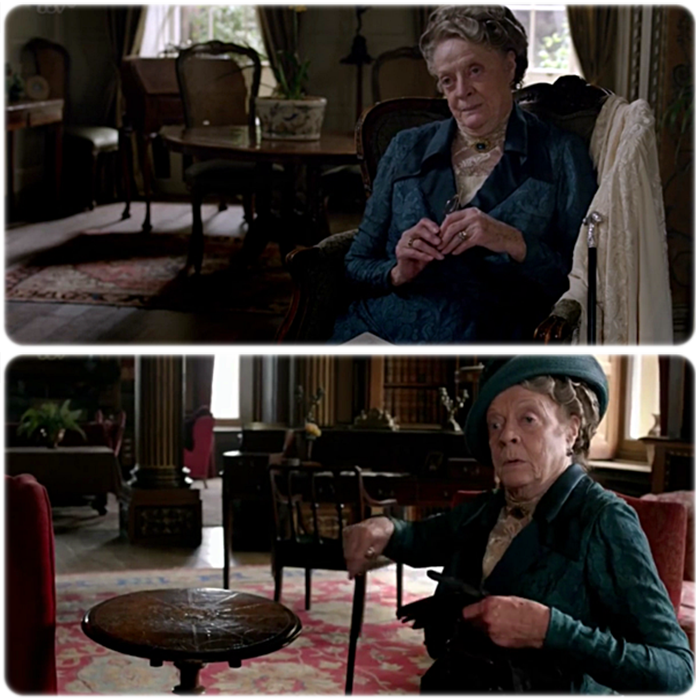 Which is more than we can say for Great-Grandmama Violet who beats a hasty retreat when crying George arrives. The first photo shows Violet calmly discussing the Tea Pot Dome Scandal with Isobel, but don't require her to be with infants. 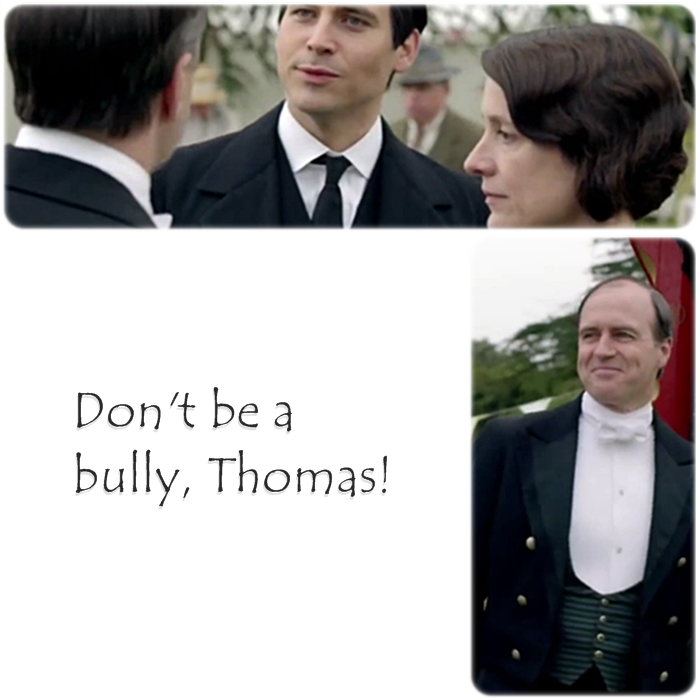 Back to a lesser, side story that is building...Moseley and Baxter's developing friendship. Lovely dialogue between them — "I know what it's like to feel fragile. We don't care much about Barrow below stairs, but give us credit for making up our minds about you." And then Moseley, our Eeyore-like Moseley, stood up to Thomas telling him not to be a bully. 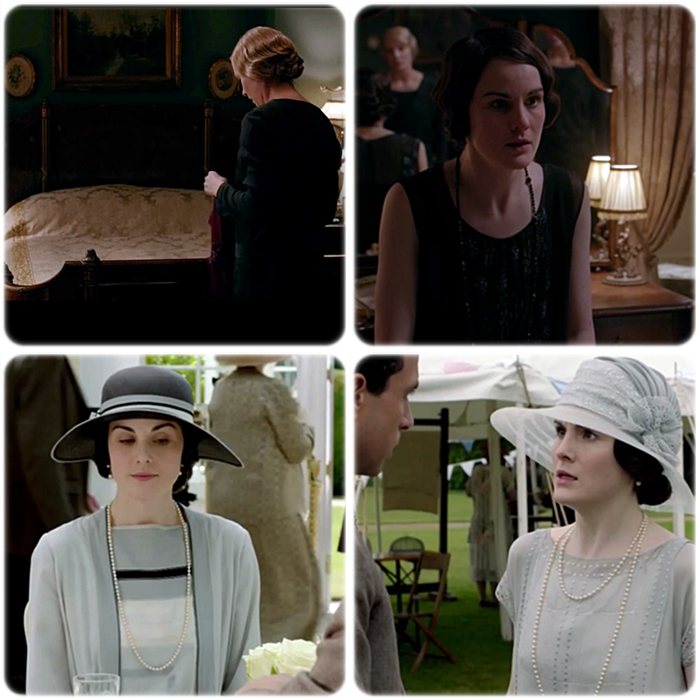 Mary was very busy in this show with suitors and realizations. Discovering that Gillingham's man Mr. Green was Anna's attacker caused her to ultimately go to Gillingham (who has the strangest habit of showing up at Downton whether invited or not) and request that he let Green go. In that final photo, she has just learned from Gillingham that Green is dead. 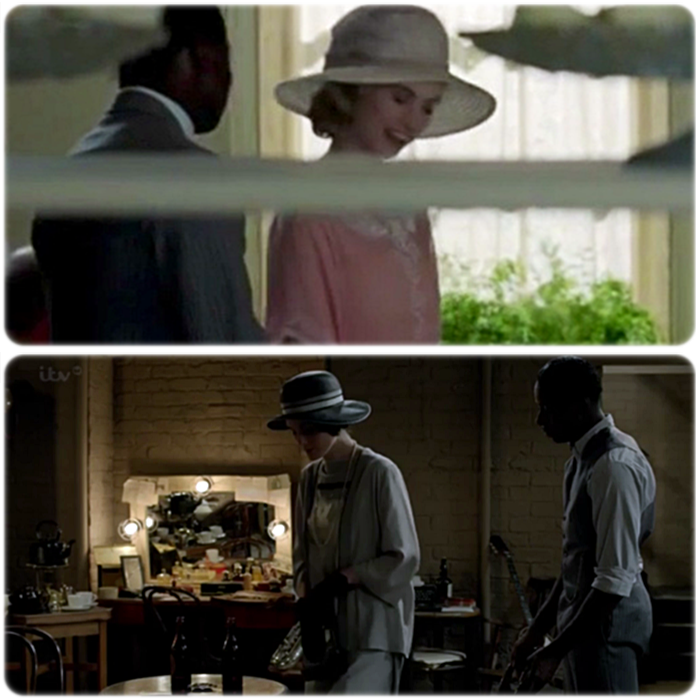 And she was not too busy to go visit Jack Ross after Tom told her that he had seen Rose and she had not been shopping. They had a wonderful conversation. In the end, Jack will step aside like the gentleman that he is and like the mature adult that he is. Rose is still a party girl who wishes to hurt her mother and has openly said so. 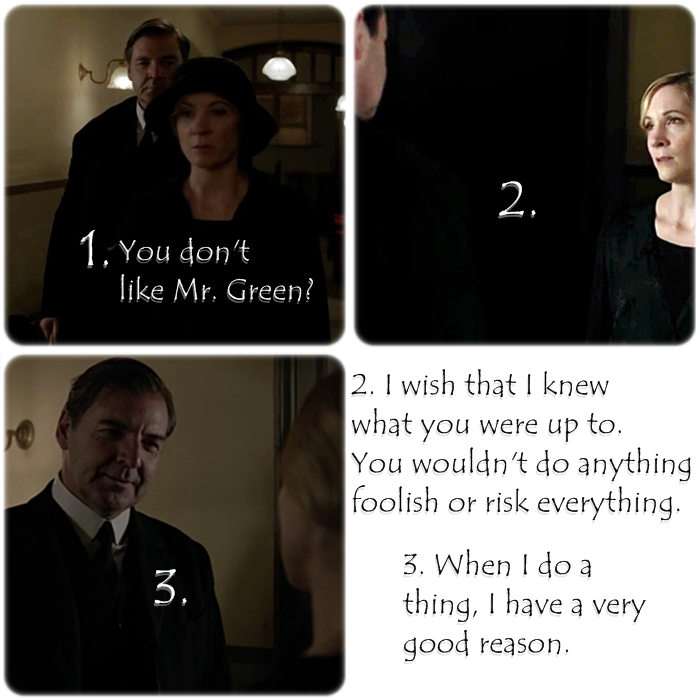 Poor Anna. She went to London with Mary, which gave Bates the opportunity to request a day off saying he wished to go to York. Did he go to York or did he go to Picadilly and do in Mr. Green? It remains to be seen. Anna is very concerned. We're all very concerned.
What do you think? 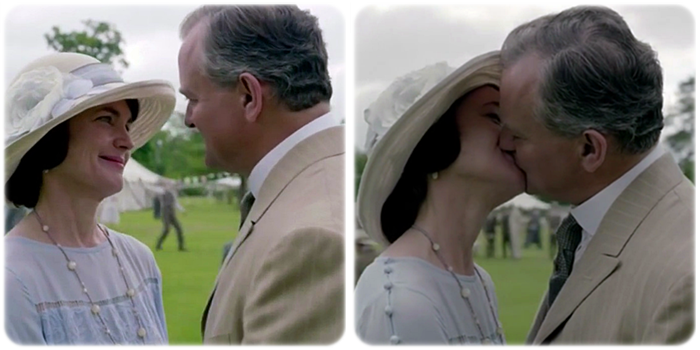 Just the sweetest "well hello" lately. I am very fond of Robert and Cora and, as some of you know, feel that this marriage is the glue that truly holds Downton together. Just sayin'... 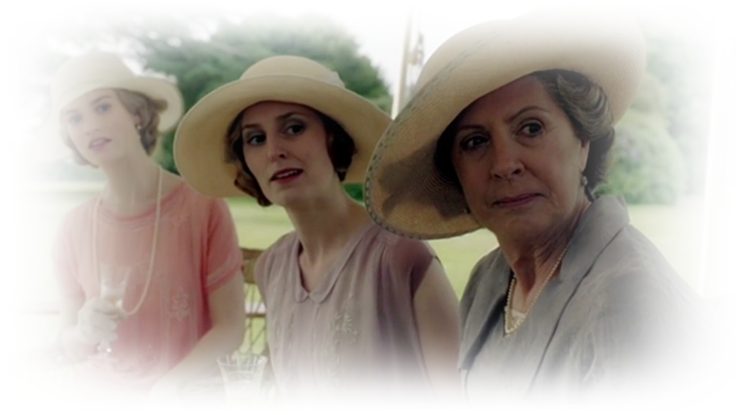 And the show ends with Mary walking off with her suitors and these three interested observers.

So many wonderful quotes from Violet:

1. No life appears to be rewarding if you think too much about it.

3. In a conversation with Edith... All of life is a series of problems that we must try to solve. First one and then the next and then we die.

(Or something like that. I have a similar philosophy, though I hope it's not quite as jaded. We have a series of problems, joys, too, and we get to die.)

If you thought a man was involved in a crime, but you thought he was in the right, would you say anything? (Mary questioning Blake)

If you're going to complicate your life, make it for the right reasons.
(Mary to Rose)

Marriage is a challenge even when everyone wants it.
(Mary to Jack)

I don't believe in types, I believe in people.
(Tom to Sarah Bunting)

Can you believe that next week is the final episode this season? It all went by so fast. Turning the floor over to you!