Just as I decided that yesterday's snowy day would pass by without my baking anything...a rarity...a friend called to say that in a few hours he'd be over for the season finale of Survivor China. What? The season finale so soon?! I vaguely remember that at the end of Thursday's show there was some sort of announcement, but I was slipping off into sleep. Oh yes, Survivor is riveting. It is.

Anyway, can't have a Survivor finale without a treat...definitely not rice. As inspiration waned, I ran smack into Linds's recipe for Cinnamon Cake, which you can find by following the link. Linds has a terrific blog called Rocking Chair Reflections; I very much enjoyed spending time there. 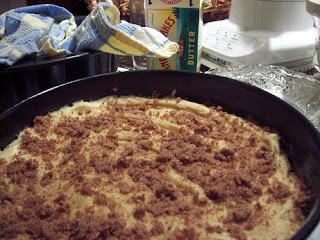 Everything that she said about her cake recipe is true. It filled the house with the most Christmasy aroma of cinnamon and sugar. This cake was a definite hit. We only have a couple of pieces left this morning. My oven temperature is not accurate so it took a long time for this cake to finish baking, but the smell made the wait well worth it. 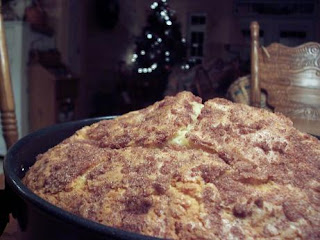 So, check out Linds's picture of her cinnamon cake on her blog. That's how it really should look. :) You won't regret baking this one!
Posted by Vee at 6:47 AM