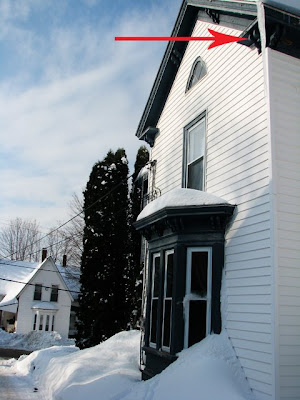 Saturday was my first Nonni Day in quite a few weeks. We've all had colds since the boys' birthday party so we were trying to avoid one another. After this long, I start to get a little antsy so was happy to get the call from my son asking if I could watch the boys while he and his sister went up on the roof to rid the house of those treacherous icicles and built-up snow. My darling daughter-in-law was working at the library hence the need. Not to be left out, John decided that he'd like nothing better than to climb very tall houses and help out. 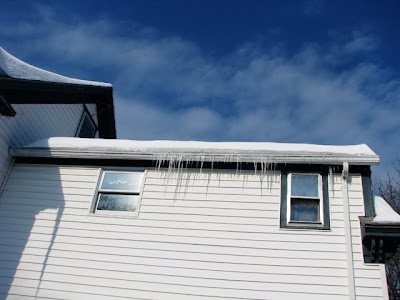 Good thing that I was nice and warm inside with the boys who were a bit spooked at first with the sounds of thumping upon the roof and the snow cascading down past the windows.

It's a veritable Thomas the Train Amusement Park in their home these days with Thomas himself roaring his way right through the living room and new wall decals in the boys' bedroom. I so wanted to sit inside Thomas and read, but when I tried to climb in, a little grandson zipped past and held up a hand looking for all the world like a junior traffic cop. He said, "No, Nonni. Not now. Get back." 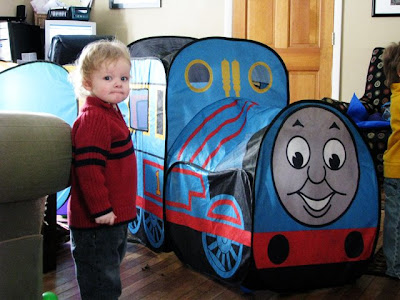 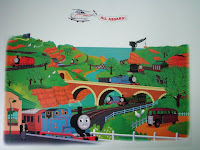 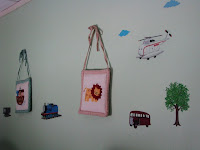 The decals were so wonderful...nothing like the old things we used to have. My mind's been going in all directions since seeing them as I'm hoping to dress up a few things (not here and not with a Thomas theme). I'll have to see what's available, but I'm certain that I'll find that there's a lot of cool stuff going on since I last checked on decals back in the 80s. I really need to get out more often even if it's a visit to the grandsons' bedroom.

After the cleaning of the roof, etc., the hard workers came in for some hot coffee and the scones that my son had baked earlier in the morning. They were so delicious and the lightest scones I've ever eaten. While the men chatted in the kitchen, my daughter, the boys, and I hung out on the sofa where we counted and counted and counted some more. 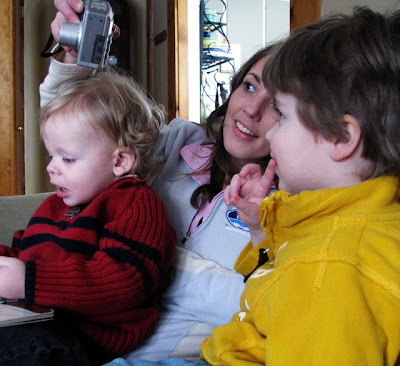 This is a little experiment to see if I can share a video. It's of our little confused counter (who is counting the pictures on his aunt's camera) and our extremely focused reader. You'll hear the men talking in low rumbles in the background and my chuckles at the grand's speech. Well, see below as the experiment didn't work out quite the way I expected and now I'll just have two posts on this topic or work on figuring out something else... I refuse to tear my hair out over this!