One of the Oldest Trees in New England...

went down Tuesday in Yarmouth, Maine. His name was Herbie, an American elm tree stricken with the deadly Dutch Elm disease over fifty years ago. For all that time, he has been tended by Frank Knight a most diligent, vigilant, tree warden who is now 101 years old. 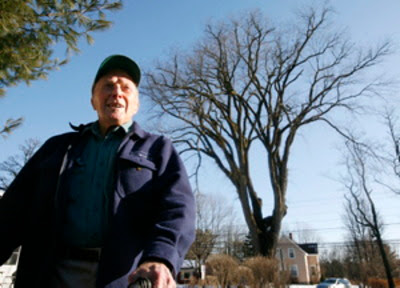 Mr. Knight watched as the crew took Herbie down this past Tuesday morning. He said eloquently, "It's been a beautiful tree. I'm sorry to see it go. But nothing is forever. It's pretty near my turn. And it's just a fact of life that life is going to end. And that's for people, for trees, for everything. I thank the good Lord every day that we had him in his glory and beauty for so long."

You can read more *here.*

Why am I telling you about Herbie when the story has been so well documented elsewhere? Well, perhaps it is because anyone who has ever lived under the shadow of a mighty elm is interested in stories such as these.

Also, in recent weeks, I've been working on trees of another sort — family trees. I've traced John's family, both his mother's and father's families, back to the beginning of time. Yes, all the way back to Adam's grandfather.

As for mine, I have not been able to get any further back than the 1800s in Yarmouth, Maine. It makes me happy to think that some of my family knew Herbie in the early years. Herbie was 212 years old.

What (or who ☺) is the oldest tree in your corner?