They were dressed in their little boy plaid flannel pjs, fresh from their baths, and all ready for bed. One wore red plaid; the other blue; and I forgot my camera hence the word picture.

My son and daughter-in-law were leaving for the first parent-teacher conference of the year so I had been invited to watch Toy Story  for a bit and to visit with the grands.

The baby grand's vocabulary has picked up immensely in recent months and he is speaking in full sentences and communicating quite clearly. I'll share some of our conversation from last weekend and you can see what I mean.

Baby Grand: Your lips are chapped.

Me: So are yours.

Baby Grand: You have a mustache. 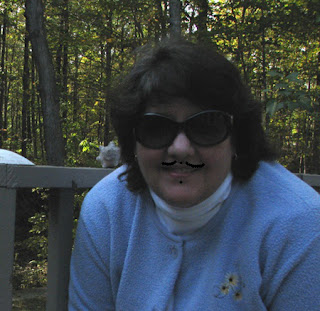 You don't think I have a mustache, do you?

Ever since, it's been touch and go between us. He seems worried that he's going to say something I won't be able to handle. That's just how tricky human communication can be sometimes. And I am afraid that he's going to take my amusement all too seriously.

Don't worry, we'll get it figured out. Last night we called up Auntie and she came to rescue us from tears and general anxiety. I just hope that Jake won't tell his aunt that she has a mustache.

Have a great weekend...