This is it for this Christmas Season. I will happily be celebrating Advent and the First Day of Christmas before year's end. I love that the years begin and end with Christmas. What a wonderful Savior to love us so that He willingly left Heaven behind for us. How we need Him! How can we not keep Christmas all year through?

Since I'm still on Christmas, albeit for the final day (yesterday was actually the 12th Day of Christmas), I want to share a couple of ideas with you. First, Cheryl at A Nest On Feather Lane had a sweet interpretation of the window idea. Actually, she's changed it all up. That's the joy of Blogdom, one idea sparks another. Cheryl says that it's too much to put up a tree, yet she still enjoys seeing her ornaments so this was the result.

I also wanted to tell you of an idea my daughter found on Pinterest about saving Christmas memories from one year to the next in a canning jar. On Christmas Day, she passed us a slip of paper and we all started writing. (That's not quite the truth, but close enough.) Then my daughter gathered them all up, popped them into the jar, climbed up on the back of the easy chair, and set it up high on the ledge in the living room.

Where it just sat way up there calling my name. I grew more and more nosy curious until I also climbed up on the back of the easy chair and retrieved it. 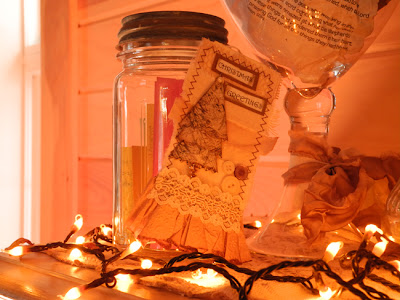 Every single one shared wonderful memories. Some of us are more eloquent than others. I noted my gifts, the laughter of the boys, and the difficulty of this first Christmas without my mother. John wrote that he was happy to have finished the siding as a gift to me and that the day was "most enjoyable." Even the grands signed their names. My daughter wrote about how special her picture book was...her favorite gift of Christmas. My daughter-in-law wrote a humorous story about making Santa's sandwiches with the boys and what Santa left on his plate—the crusts.  My son wrote:

The assignment is to write down the fondest memory of 2011. Mom tells John it should be easy to come up with a fond memory of today. Laurel says it's for the whole year, but if you want to write one about today (Christmas), that's fine. As though I wouldn't have a hard enough time with this already, and to make matters worse they gave me a pen. I already want to erase what I've written so far. I'll do both. Today is easy; Sam's playing Clocks by Coldplay on Laurel's I Phone (hit the lighted button) and he can't stop. He says this song is like a rock song. That album was the soundtrack of my first year with Michelle. Glad to know we can agree on what's beautiful, at least sometimes. 2011 is another matter. There are some fond memories; Jake's face when Santa put him on his lap. I'll write what I least want to forget though: Grandma. Taking Sam out sledding (Jake was in school), planning to go to the boys' birthday party, even lying peaceful in my bed. Saying yes, Adam, I know you're here. As though there was no need to sound so worried.

The man is an accountant. I'm very proud of all of his accomplishments and his hard work of returning to school and earning his degrees. I had no idea that he could write. At all. Not even a little bit. I hope that he'll continue. He might get a journal for his birthday. Just sayin'...

Disclaimer: Now as for Clocks ...love the music and find the lyrics de-pressing. I found Sam's exuberant playing of Handel's Messiah wonderful.

A blessed Epiphany to you...