While looking through winter photos, I found one of Mt. Washington, the tallest in the White Mountain Range of New Hampshire and the tallest mountain east of the Mississippi. Then I thought that surely I had enough to make a set of note cards. On a clear day, there are places in my town where Mt. Washington can plainly be seen so it is always there, not as strong a presence as many of you who live near mountains, but strong enough to be a part of the fabric of our lives here.


You may be interested to know more about the weather conditions on top of Mt. Washington by visiting *the observatory.* The weather there is notorious, something about the way the weather patterns converge from the Gulf of Mexico, the Pacific Northwest, and the North Atlantic. Oh, yes, it can get wild!

In fact, until three years ago, Mt. Washington held the record for the highest winds ever recorded on earth at 231mph. I would not have been surprised to learn that they regained that record last week when fierce winds blew through.


As a point of interest, I am including a map to show where each of these photos was taken. They were all taken within a fifteen mile radius of each other. 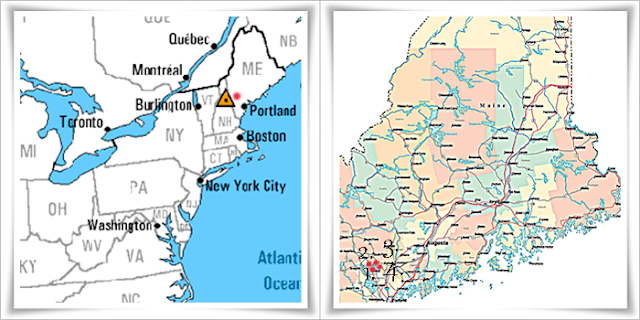 Mt. Washington is shown in the orange triangle in New Hampshire. The red dot on that map shows general location of my photos and the four distinct dots on the map to the right show where each photo was taken. The numbers correspond to those shown in the captions. (Some photos were taken by zooming in, which accounts for the look of a closer proximity.)

Thanks for visiting. This party is welcome to anyone who has read the rules and follows them. You can find them by clicking on the button in my sidebar. I promise that they're short and sweet.

Vee
After blogging for fourteen+ years, I've already told way more than I know. This blog remains ad, award, and word verification free; however, as a Blogger blog, this site collects cookies.