To make it worse, he insists on watching a b c. Get that news anchor in mind. I'm not going to mention any names, but could she please select a more flattering fake eyelash or two? I've never seen anyone's eyelids droop more even after an all-night bender. (Okay, no, I have not really seen anyone after an all-night bender, but I have seen movies... )
Maybe things will improve after the election. I'd really rather listen to WLS Chicago from 6:00 to 7:00, 8:00 or 9:00. Any fine day. 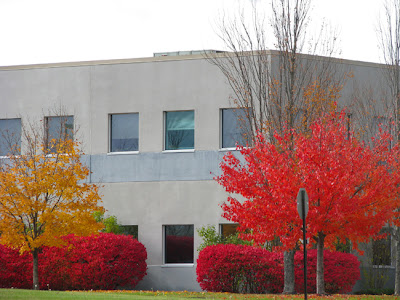 We've still got some lovely color in spots. Yesterday, I took my mother to get her license renewed and there we saw these beautifully colored bushes and trees. I just love the color combinations.

Mother took me out for lunch to Tim Horton's. We got so excited to see Canadian Maple donuts offered again. Noooo, that's not all we had, but I did eat half of my donut first. Hey! Life is short. Mother had the chili; I had the BLT on wheat and a cup of coffee with the remaining half of my donut for dessert. She even brought two donuts home to John. He had a pumpkin spice and a Canadian Maple. He said that if he had eaten the Canadian Maple first, he would've been very disappointed with the pumpkin spice, which he thought was very good until...

Do you have a Tim Horton's in your corner? If not, what's your favorite stop for coffee and donuts?