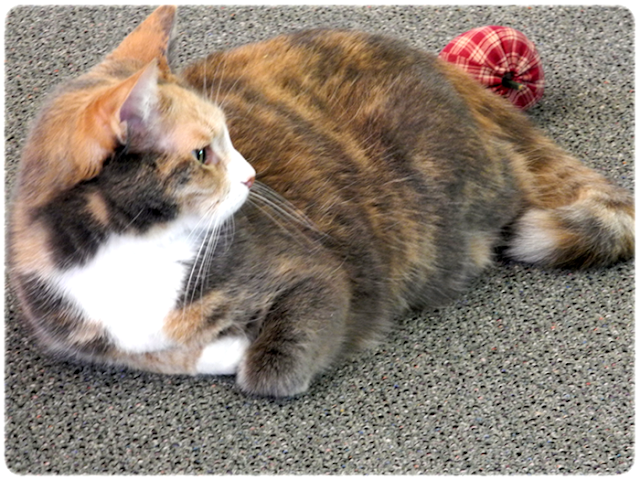 Did I say "apple"? As you all know, I have an *AAB on this blog until September 1, which does not arrive until Sunday. Lalalalalalalala...

Did I say "scientific mind"? Yup. A regular steel-trap of a mind. I can tell that I may have to prove this to you. Read on...

Today's post took shape as I listened to John discuss Fioré's personality. We had been watching her bat that apple all over the dining room this morning. She loves "her" apple and when she gets tossing it and chasing it about, she is a wild thing. High strung. Up tight. John said, "If Fioré fell out of a tree, it would kill her because she is so tense."

That comment made me wonder how Fioré might ever fall out of a tree since she is an indoor cat. Then I wondered how she'd fare from an upstairs bedroom window.

You see, I have had some experience with that. I remember very distinctly the day I dropped Fluffy, our gray money cat, out my attic bedroom window. My bedroom was painted lavender with white organza curtains featuring lilac blooms across the hem. (That was for you bloggers who enjoy room descriptions.) Where was I? Oh, yes. I dropped Fluffy out the window without knowing that my mother was seated in the bathroom located on the first floor directly below my bedroom. She saw something fluffy and gray fly past in a vertical descent. Very presently, I heard, "Vee, where's Fluffy?!"

I was already running for the stairs as Fluffy had made a four-point landing and had scampered around the front of the house. I made a bee-line for the front door and would you believe there was Fluffy waiting to be let in as if nothing had happened? That poor cat never held it against me as far as I know. Perhaps I did him a favor by kickstarting his heart for he lived a good long life.

Needless to say, I had some explaining to do for my mother was now demanding answers. I showed her the book I had been reading just before "the event" where all these oddities of nature were contained. To her credit, she held her cool and very carefully explained that I was never to do that again.

Then there was the day that I wondered if that Vaseline™ commercial were true. I fetched my mother's sieve and proceeded to the bathroom to experiment. By the time my mother found me, I had Vaseline all over the place and most especially all over the sieve. I chortled with glee, "It works! It works!" This as I flushed it with water, which flowed out over the top of the sieve, but not through it. My mother may have said, "Any idiot would know that!" It gets a little fuzzy after that.

And then there was the day that I thought I would do my mother a kind deed by scrubbing her entire kitchen with Comet™. (It's a product placement kind of day.) As I recall, that didn't go over so well either. Gee, Mom, I was only trying to help!

So tell me, I can't be the only one, do you have a scientific mind, too?


P.S. No cats nor apples were harmed in the telling of this tale.
Posted by Vee at 11:29 AM