Nothing has sparked my interest in the Photo Challenge like this month's topic. I took to it, well, like a duck. I began eagerly taking my photos right after the last photo challenge ended.

Would you believe that I am going with those first photos taken a month ago? If you're a regular here, you've already seen many that I considered because a lot of water was included. In the end, I've learned that I have much to learn about photographing water.

I use a Nikon Coolpix P7100, a glorified point and shoot really. I'll spare you the particulars because they don't translate to usual photographer-ese anyway. 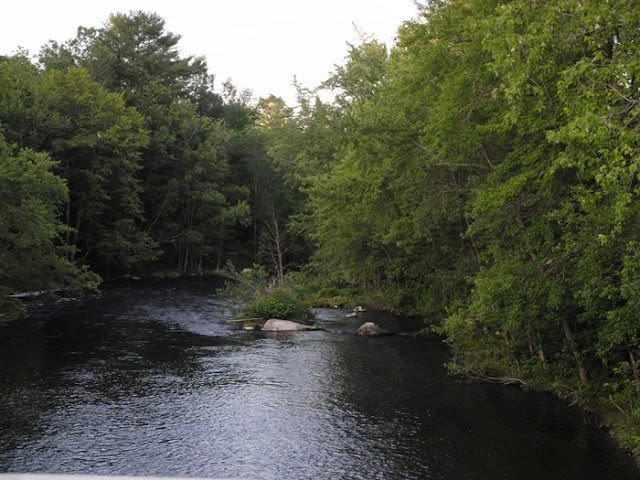 Here's the mundane little photo (sooc) as it came to me from my camera. It is of the river that flows through my corner; it is the wonderful little river that ran a paper mill and a century of life in a mill town.

This spot also represents the turning point; my sister and I would go as far as the bridge I was standing on to take this photo and then kayak back down the river. We so loved that little paddle past mossy banks, great ferns growing, and trees hanging low over the water. I always wanted to take a camera for those photo opportunities, but feared a spill and getting the camera wet. (I'm steady once in the kayak, but not so graceful getting in or out.) 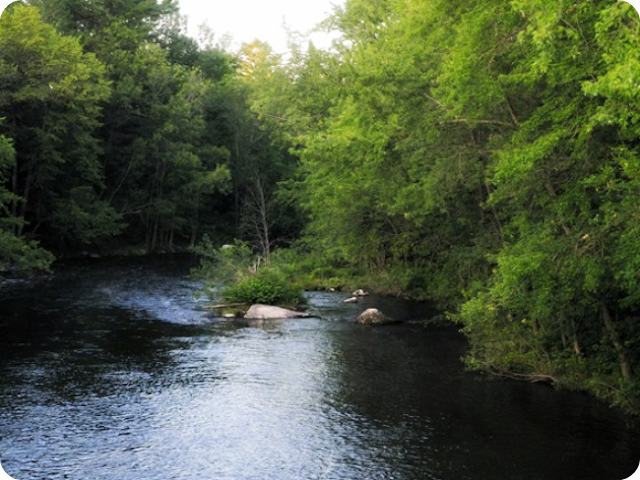 Here it is after cropping it and running it through PicMonkey a few times. (It was a cloudy day, but I still don't like the sky showing up white.) 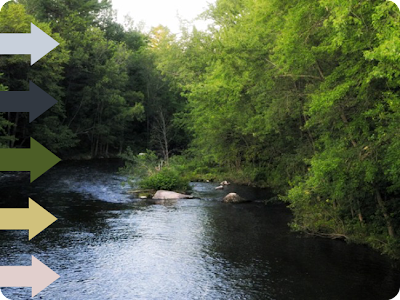 And here it is after running it through Pic Monkey to find the color swatches. Lorrie first told me how to do it just this week. How often I have wanted to build a quilt or a room around a photo. Now I can!

Did you catch that "look here" thing that I did because the photos really aren't that compelling? You did? Foiled again!

Would you have liked this one better? 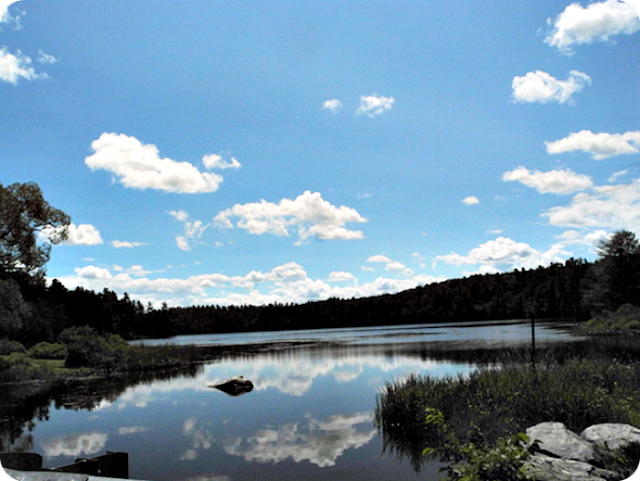 Other than the clouds reflected in the water, the details are lost...back to the dress rehearsal.

Linking to the incomparable Donna at A Personal Photo Challenge.

Edited to Add: Donna, bless her heart, took my original photo and tried to get some of the details back. I'm so impressed! Here it is with commentary from Donna following. 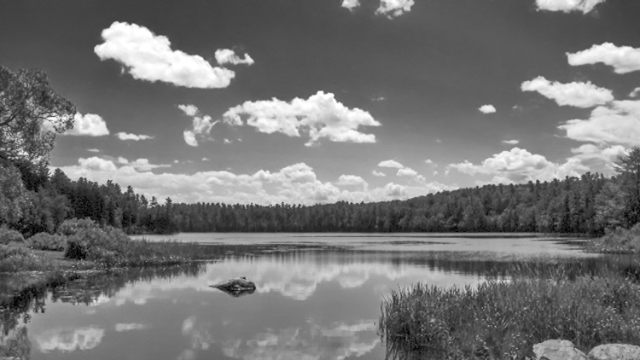 I was using Jim's computer to prepare a photo for this Wordless Wednesday's post, and thought I would give your photo a whirl.  It was exactly 2 stops underexposed.  Unfortunately, when I opened up the shadows and increased the exposure level, a lot of the colors got stripped out.  I didn't have enough digital information in the file to get it back.  So, when life hands you lemons, you make lemonade.  I turned it into a black and white image!

There's some funky digital noise in a few places.  You wouldn't notice most of it unless you zoom way, way in.  The most noticeable is some mottling in the sky.
The uneven sky tones is a classic result of a jpeg file that has been abused in post-processing, LOL.  I tried to remove it as best as I could.  You might not even notice it, but I know where to look.

I also straightened it and made it a wide format, cropping out the bridge structure and some of the sky in the process.  I hated to crop in a standard 3 by 4 format because you have some interesting vegetation on both sides that needed to be kept for the composition.  I wish I could have kept more of the rocks, but I didn't have enough to work with on cloning out the remaining bridge structure on the other side.  In any event, it is a perfect size for a computer background!

Ah, the beauty of post-processing!  I rest my case on why I am a big fan.  As you can see, this is a very lovely photo that you took, Miz Vee!

Hahahahaha...I left in that bit about "a very lovely photo," but I want you to see what Donna received in her inbox along with the message below.

Wow, Donna. It's even worse than I remembered. ☺ 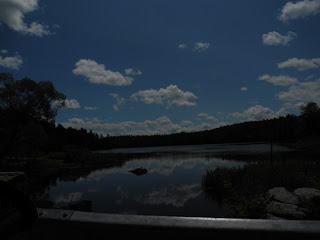 You see, Donna's made a believer out of me! (This is a small version. Donna got the largest version.)
Posted by Vee at 7:13 AM