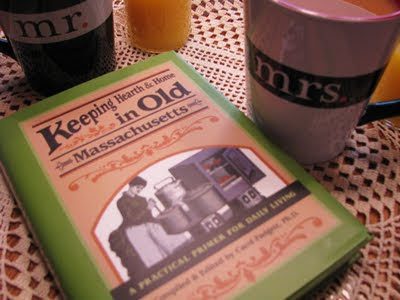 My daughter-in-law's family originates from Cape Cod so perhaps that's why she picked up this primer for my birthday last week. That and she actually listens to what I enjoy.

Clicking on the title of this post will take you to Google Reader where you can take a peek or two, if you are interested. It really has been a fun read.

I want to tell you yet another story about the grands who are old enough now to enjoy the excitement of someone else's birthday. They were happy about sharing some time having cake and ice cream and visiting last Saturday. (Not my birthday, but close enough.)

When they arrived, they made a hasty advance on the picnic basket where the toys and books are kept. After opening my gifts, I offered to read a new book I'd found for them, but Sam wanted me to read them Keeping Hearth & Home in Old Massachusetts instead. Oh I'm sure that he thought he was in for a great adventure.

So I read from the front flyleaf in my best keep-their-attention voice.


Wise advice for husbands: Husband, counsel with your wife and be assured that light will flash upon your darkness. Woman is far more a seer and prophet than man if she is given a fair choice. If you are in any trouble or quandary tell your wife all about it at once. Ten to one her invention will solve your difficulty sooner than all your logic; what is wrong of your impulse or judgment, she will detect and set right with almost universally right instincts.

Sam sat very quietly throughout and when I finished he said, with the foggiest look imaginable on his cute little face, "Uh?"

We all cracked up laughing, even Sam. Finally, he asked through his giggles,"Nonni, what's so funny?"

I reenacted his "uh moment" and we all laughed again.

It wasn't two minutes later when I said something else and Sam responded with an "uh?" Again we laughed. Okay, his poor parents. Though laughing, I could see them begin to realize what they were in for. I can only imagine what the week has been like. I'm afraid that Sam has likely had his first lesson in "what is funny the first time, isn't so funny over and over again."

Went shopping for a month's supplies yesterday afternoon and wheeling that non-functioning cart around Wal*Mart (there's not a decent one in the entire store) nearly did me in. I'm seriously considering a chiroman.

It's someone else's birthday today. He's celebrating many anniversaries of his 26th birthday. I really did rob the cradle now, didn't I?!

He's asking for strawberry shortcake today so I will certainly oblige. He's an easy man to please.

By way of explanation concerning my little sidebar picture and caption...we used to play the "Animal Game" on car trips when the children were bored. Teams are divided by sides of the car and sides of the road. Right-seated passengers must look for animals on the right side of the highway while left-seated passengers obviously look for critters on the left side. Each time anyone sees an animal on his/her own side it's a point. Birds are the exception as they fly left and right and go all over. No birds! A cat in the window equals an automatic win. Anyone else ever play this game?
Posted by Vee at 7:44 AM