Some Good Reading for You 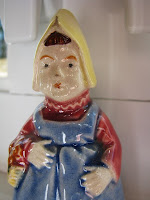 This wee little Dutch girl is a salt shaker that my mother gave me years ago. She has a few little problems. Her bangs are too short — way too short; her lipstick is covering only one side of her lips (must've been in a hurry to get out the door again); her eyes have that vacant, faraway look. She's thick-waisted and on the pudgy side. And her hands? They're way too big. Her eyebrows? Oh dear! Nevertheless, I feel a certain affinity for her and, just to prove it, she brightens my kitchen windowsill every year about this time.

(Edited to Add: Okay, there may be trouble in paradise. As I was composing this, John came along and said, "That little salt shaker reminds me of you except her cheeks aren't as pink as yours." You don't want to know what I told him!)

While I was away all that time last summer and autumn, I missed a lot of news. For starters, I haven't caught up with all my blogging buddies and every now and then one will mention something and I'll realize that I haven't a clue what's going on... Gosh, I hate that. So if I ask you a question will you promise to fill me in? Thanks! In fact, if you think that I've missed something important, would you tell me today? Double thanks!

Then there was the news, only recently learned, that David McMahon is no longer blogging. He's returned to work full time on his novel writing. Now David did the most remarkable thing for Blogdom for a long time. He supported and encouraged writers by having a "Post of the Day" feature on his blog. This was an incredible thing because many pieces were submitted daily and he committed to reading them all. You'll note if you visit that David's subtitle is "totally committed to encouraging excellence in others."

I submitted selections from time to time. One such piece was Suzanne's post about her step-father called Life and Death in a Cornfield. I later discovered that I wasn't the only one to submit that post. If you've not read this piece, bookmark it. You'll not regret it.

More recently, there are two posts that I've been thinking about a lot. They're the kind of posts that help one rethink a thing or see something more clearly than ever before.

The first is titled Trading "Oh no!" for "Yes...and" by Shari at The Big Yellow Farmhouse. Well, after my first paragraph, you can see why this one resonated with me.

The second is an insider's look (this gal is a lawyer) at the alarming rise in teen pregnancy in a post called Warning: This is a Soapbox I'm Standing On. C at Stick Horse Cowgirls warns that she is on a bit of a rant. Well, she can rant away because what she says makes the most profound good sense. I encourage you to read it.

If David's Post of the Day were still around, I'd be nominating these two for sure. Anyone know of any other blogger providing such a feature?
Posted by Vee at 7:13 AM