Oh no! This is terrible! And it was. Really.

Let me back up. Last week I was shopping at Amazon, when I realized that I needed a little something extra to get my free shipping. You know, spend an extra ten dollars to save four. I decided that I would purchase that nice little book I gave to Suzanne as part of her winning the Mennonite Girls Can Cook cookbook contest. It was déjà vu all over again as that's what had happened when I was ordering Suzanne's books. I had needed a little something to get me over that limit then, too.

So I ordered the little something extra and it arrived in timely fashion and I sat right down to read it and I was not four paragraphs in before I realized oh-oh. Oh-oh.² Lots of language. Lots of quirky characters. Lots of oh.dear.me.what.have.I.done.

And so I have laughed and cringed my way through it. I think the most mortifying thing about it is that there's a character who blogs.

People don't take my skills seriously, but there's an art to it. There really is. When I was on a roll, I used to update my blogs eight, sometimes twelve hours a day. That's eight or twelve hours of writing. Stephen King is probably one of the only other guys who writes that much... p.8

In some not too noticeable ways, I'm a reasonably confident guy. Sure, I'm not into socializing and dating and whatnot, but I do write a couple of blogs. I form opinions and I write about them... p52

When you spend all day, every day, on the Internet you develop an image of yourself in relation to the world. You know what I mean? It's like your looks or lack of them are manageable. Because you focus on other people and no one can see you and if you make the odd crack about yourself, well, that's just you being human and relatable. p.238


Every now and then I have felt that the author knew a little too much about blogger types, me included. I mean I always feel as if I'm doing something when blogging just as this character does. Suzanne even emailed asking me just what it was about this book that made me think to give it to her. Oh, I'd responded blithely, I read about it *here.*

Now I ask you, wouldn't you want to read a book with this blurby little bit on the back cover? 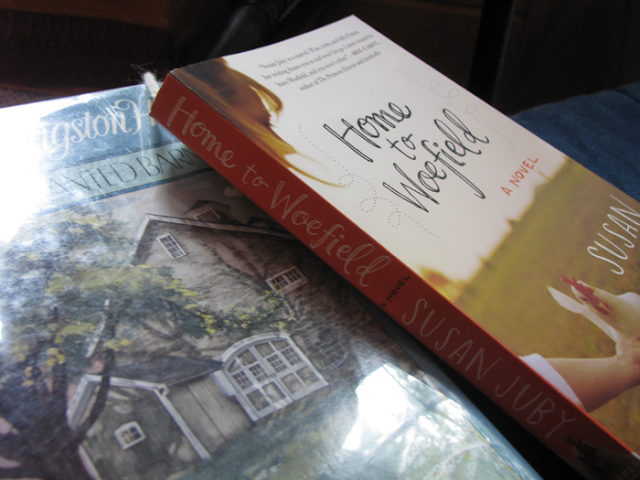 Somehow I got it into my head that H to W was going to be 2011's The Enchanted Barn, an old story by Grace Livingston Hill about reclaiming a barn for a home. Hill's writing is lyrical and genteel and, well, quaint. This is one of my favorite passages from TEB:

She decided to decorate first. The great hamper of flowers was forthwith brought into the barn, and the chauffeur set to work twining ropes and sprays of smilax and asparagus fern over doorways and pictures and trailing it like a vine about the stone chimney. Then came the flowers: pots of tall, starry lilies, great, heavyheaded, exquisite-breathed roses, pink, white, yellow, and crimson...

Forthwith is such a lovely, old-fashioned word. There were lots of words that began with that letter in H*ome to Woefield.


So you may be thinking that I don't recommend this book to you. I don't. Not in good conscience. Not if you shy from language that makes you want to wash your own mouth out with soap.

You may be thinking that I slammed the covers shut and didn't read another word. Oh no. I have a unique philosophy about reading and literature and dramas, etc. I've shared it all *before.* I take the C.S. Lewis approach. I very much enjoyed the book.

It was the shame of having gifted it to someone else that I didn't enjoy. So, on that note, my sincere apologies to Suzanne.