Armchair Caddy or How to Tease the Girls 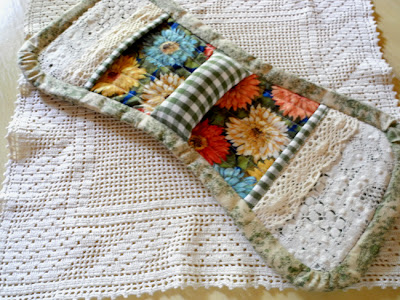 It happened again! I was seated on the sofa comfortably sewing buttons on John's shirt when I dropped the needle and panic ensued. I have dropped needles many times in my life and seldom do I ever find the little bugger. I decided right then and there that I would be making the sweet sewing caddy I had seen earlier at Susan's
Homespun Quilts: That About Covers It (is that not the cutest title?) [About the lost needle...John says, "Don't Move! I'll get the flashlight." Hahahahahaha...works every time.] 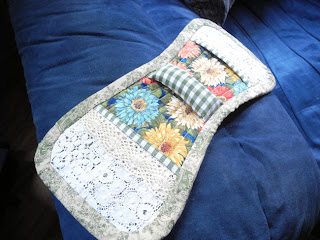 So this is how not how you use it.  It was not designed to work with Volkswagens. 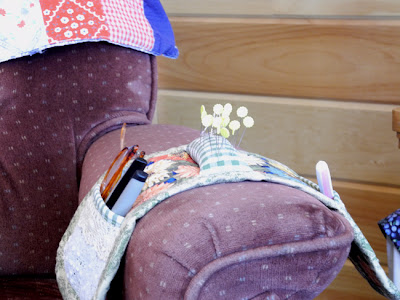 Here is the Flying Nun version on John's chair. Hmmm...trouble is, I rarely get to sit in John's chair. As you can see it has two pockets for snips, glasses, seam ripper...definitely the seam ripper, and it has a pincushion. 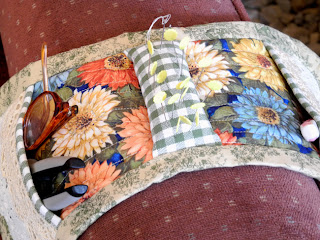 So my daughter came in and I proudly showed her my newly made caddy, created from all manner of scrap material, and she asked, with a certain level of disdain, "What is it?" And I picked it up by its little pincushion there and let the two sides flop down and replied, "It's a wee little pocketbook." I was rewarded for my cleverness with eye rolls and the general sense that she thought that mother was losing it. Gosh, that was fun. =D

When she found out what it really was, she perked up some and asked if I'd be making one for my daughter-in-law who was celebrating a birthday. 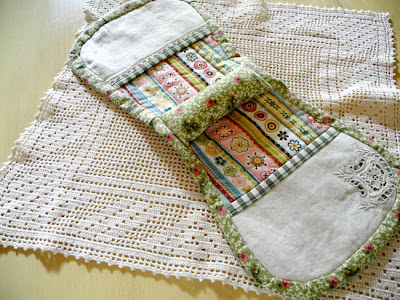 That's where this one comes in. Can you see that I used an old linen napkin of my great-grandmother's? I also used an old tea towel in addition to the regular fabrics.

Now this is how daughters and daughters-in-law differ. When I delivered this to my daughter-in-law, she immediately said with a bit of delight in her voice, "Oh, it's an oven mitt." "No," I said demonstrating, "It's a wee little pocketbook." Daughter-in-law looked nonplussed and with a little bit more delight in her voice nodded and smiled and said, "Ohhh, right, of course." No look of disdain. No look of mother-in-law might be losing it. (John thinks she may deserve an Oscar.)

We said our goodbyes and just before I hopped into the car, I told John that she had fallen for it. When we left, Dear Daughter-in-law was grinning. I do love to tease the girls.

Now I'm off to find an oven mitt tutorial. If you know of a good one, let me know...