From Oxford to London

Hope that no one arrives here today thinking I actually know anything about that journey. I only know a little of this piece's journey and, until a few days ago, I didn't even know that it included Oxford to London. 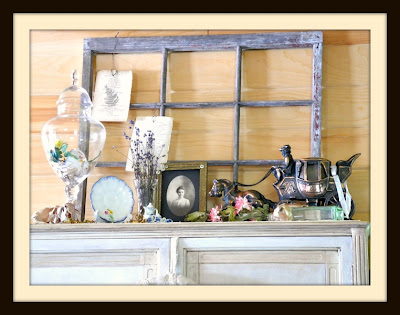 As my regular readers know, I inherited many things when two of our family's dearest passed away within weeks of each other. Much as I tried to foist treasures off on other family members, they declined with few exceptions. We took a large load of things to an animal shelter thrift shop a year ago and have taken a few loads to Goodwill as recently as last month, yet I am still sitting here in a pile of things. As FlyLady says, "Clutter cannot be organized." She's right!

This is the provenance of my grandmother's night light. She received it as a wedding gift in 1931 so it is now 81 years old. It is a heavy, bronze piece representing a mail wagon with a driver and "two horses." The small light is housed behind the carriage wheels and shines out through those isinglass windows. (Yes, they truly are isinglass.) 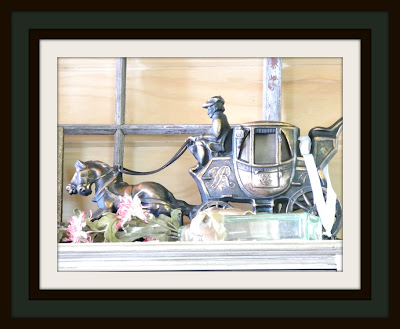 The full body of the horse on the driver's right doesn't exist...don't let that spook you. Just the head shows. Apparently, all the legs are running in tandem. ☺ There is no footman (and never has been) — I don't know of anyone who'd enjoy that seat. 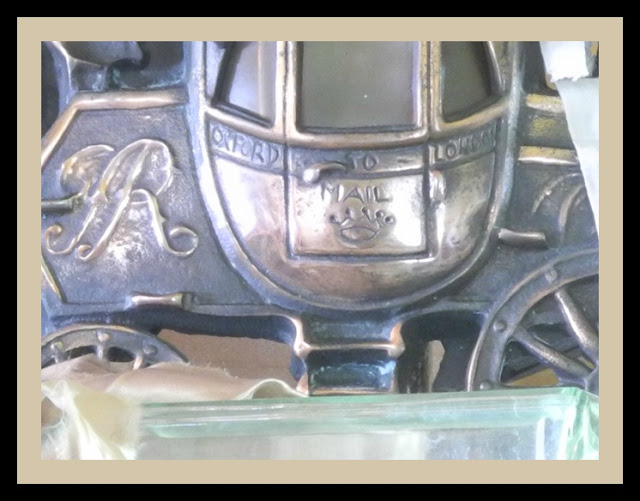 Here's a bit of a close-up...the something and an R to the left, the Oxford to London on the door along with Mail and the emblem of a crown. On the right the year 1773, which isn't shown.

Now I have tried to gift this one. It was a childhood favorite, but not an adult one and has been tucked in every corner of my home for over a year. I finally decided to polish it a bit...something my grandmother never did that I recall. It would have taken forever so I gave up rather quickly and I also didn't want to destroy anything. So I polished only a few highlights and called it fine. I've decided to embrace it — for now.

That's the story. If you know anything about such pieces or have one of your own, please share. Thanks so much.

A happy Friday to you...


The frames are all courtesy of PicMonkey.
Posted by Vee at 8:32 AM