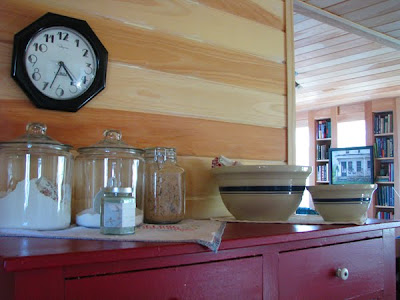 This is the view that I usually present when I'm showing a kitchen photo. That's because I'm trying to avoid showing you something I consider too unattractive for Blogland. 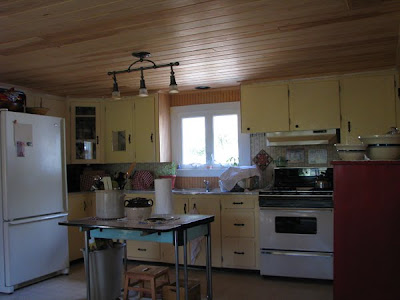 This is what I consider too unattractive. The cupboards needing paint, the ratty, old wallpaper that has to go, and the 1982 stove. I've been thinking about my grandmother's table, which I use for an island. Thankfully, I have it because it comes in handy, but all that stuff below...ackkkk. I've thought of putting a vintage fabric around to hide the unsightly stuff underneath. I need that stool because I'm short vertically challenged and can't reach the top shelf of my cabinets. There's a recycling bucket there because we recycle. (This despite the fact that a number of us are wondering what happens to that garbage. I certainly hope that it isn't dumped offshore someplace. We have all heard the rumors. Anyway, we recycle and I wouldn't mind the recycling if I thought it were doing some good. I'm just not sure.) The small wooden box holds kitty food.

Anyway, back to Nan's old kitchen table. I painted the far end the same color as the jelly cupboard. My daughter nearly had a fit when I showed her. She wants me to leave the blue and well enough alone. So I guess that I'd be attempting to find some vintage fabric that would include plenty of colors...shouldn't be too, too tough. 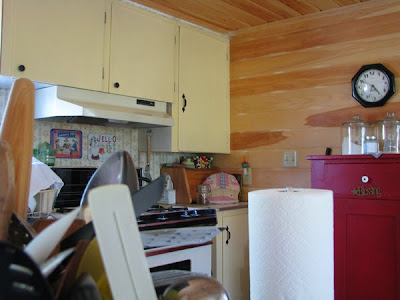 This still looks cluttered, but it is an improvement. The back of my stove was formerly covered with salt and pepper shakers, a basket with spices, little whatevers. All gone now! 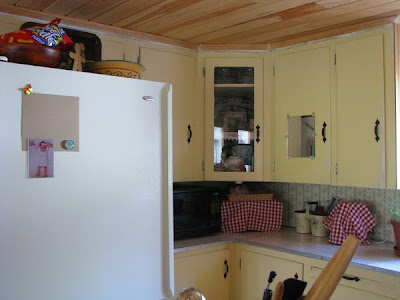 This is the microwave, toaster, and coffee pot corner. Since there is no place to stash the toaster and coffee pot, I've been thinking of making some covers from the same fabric that I'd use on the table. Any thoughts about that?

One of the things that I had been doing was to line up the counter with stuff to hide the electrical cords. Had no idea that that was what I was doing until the decluttering began. I asked for an extra outlet, but now is not a good time to be asking the carpenter for anything as he's on overload. His answer to my dilemma was to move the microwave from the corner to its spot beside the fridge. Well, I guess that works for now. 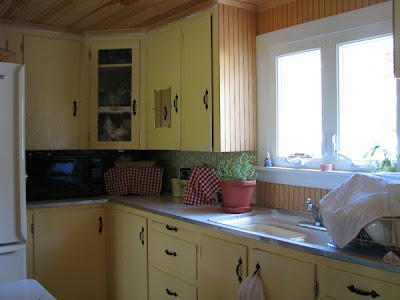 Only I would show you my dish drainer loaded with dishes. Gheesh. 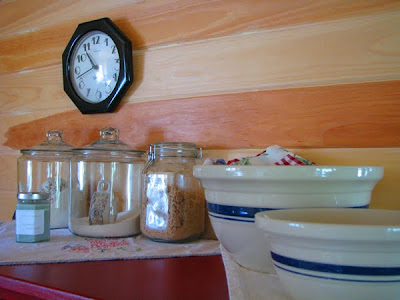 Will leave you here where we began. There's a lot to be said for decluttering. Please visit FlyLady on my sidebar if you need any tips on the process. She saved my sanity one year and I still refer back to her when I'm overwhelmed with the house.