I am beginning this entry on Tuesday evening at 6:16. Having just listened to tomorrow's weather report, I now know that there'll be up to three inches of snow on the ground by morning. On April 28? Good heavens! It has made me go back in bloggy time to that terrible winter and spring when the snow hung on forever. That was the year that I held a contest on when the last vestiges of snow would be gone. Barbara won that giveaway. She said that she just had a feeling that she would. Isn't that fun? In case you're interested in that date, it was April 22, 2008. This year, even with a mild winter and an early spring, it'll be a later snowfall. Nuts!

So there's been snow on the forsythia and now there'll be snow on the azaleas. (This will be something I've never before seen so if it does happen, I'll be documenting with another photo.) Good thing that I took lots of photos of happy azaleas yesterday. 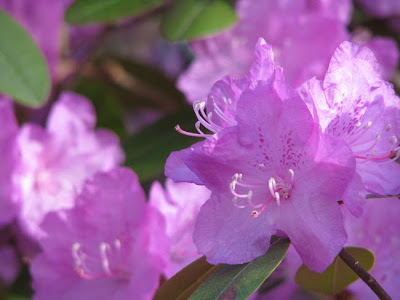 Tonight I will watch LOST. I'll visit Chris and see if she has anything to say about it. I need to start a forum or something for fans of LOST. No, no, I don't. Such things already exist, but if anyone would like to chat about it, do feel free. Nope, it was a rerun. Ugh. But it did force me to find the final schedule right *here,* which explains what will be showing through May 23 the finalé. Only LOST fans need check. :D Just don't anyone be looking for me on May 23. No one. Anywhere. I'll be in a LOST coma.

Let's see, what else, Dear Ones. Oh! I do want to thank those who said that they'd read a book I wrote. That's just so sweet. I don't imagine that you'd be too terribly impressed however. If you've been reading this blog for any time at all, you know the gist of it for, like most first novels, it is autobiographical in nature. Oh, yes, and I'll ponder whether to share a bit from what John read. I did share some *here* from another story I was working on back in 2007. A few of my current readers commented at that time. Would you believe that I have since lost those chapters? You would? Go figure! You'll laugh to see how I ended that post. The word becalmed comes to mind. < insert wry grin >

I'm having a waiting kind of Wednesday, waiting for word, waiting for the phone to ring, waiting... (My mother is having more surgery today.)
Posted by Vee at 6:16 AM