John usually rises before I do. He makes his side of the bed sort of, shuts off the nightlight, and heads down the stairs. When I hear the coffee pot perking along, I get up, too. Molly is usually waiting for me at the bottom of the stairs, scampering all about. Nothing is quite as good for a gal's spirits as being greeted by a hyper poodle who has to go. 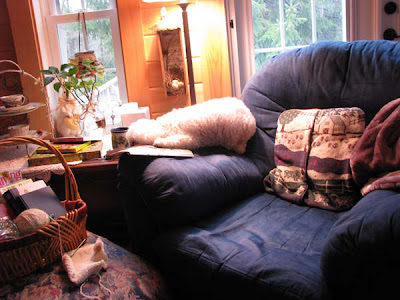 It is a rainy/hail-y morning so I settled into my cozy chair; John brought me my one cup of coffee for the day, and I crocheted, sipped, and listened to John read me snatches from the paper.

Seems our corner has a few unusuals in it. Last night, a man doused himself with gasoline and called his girlfriend to tell her what he'd done. She in turn called the police. They finally found him sitting in his car. When he saw the police, he took off running into the woods. The police briefly considered calling in the scout dogs, but reconsidered once they realized that it would be pretty easy to follow the scent themselves.

In other news, a man beaned his wife over the head twice with a rock and tossed her down an embankment. He lost his footing and fell down after her. Smart girl came to and wasted no time running to the police without wasting time helping him. Three hours later, the police found him in the woods and asked about the rock. Seems he collects rocks and had some in his backpack. Oops. No rocks in the backpack. Must've used them all already.

This case is really interesting because the husband is having an affair with an old girlfriend and his wife just inherited four million dollars. Hmmm... 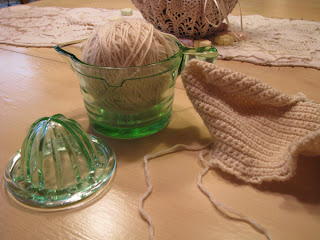 Green Depression Glass...smooth segue, what? I thought about using my juicer to corral the ball of yarn. I think it would work if the ball were much smaller. 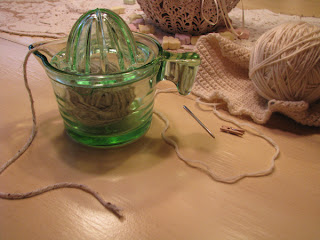 Thus ends my contribution to Blogdom. Perhaps I'll be more inspired tomorrow. ☺
Say, what's the crazy news from your corner?
Posted by Vee at 9:26 AM