We Were Not Thinking

"It's a good thing we didn't measure this," John puffed as he pushed the box spring up the stairs while I tugged from above.  "We'd never have bought it!"

And that is the truth of it. My Serta mattress needed replacing after seventeen years. It had a ten-year warranty as does the new one. (It isn't a Serta.) The new mattress is nearly two inches deeper than the old one necessitating new bedding, which we also didn't consider.

Further, we didn't consider needing a ladder, a catapault, a pole vault, a trampoline, something to climb into bed! 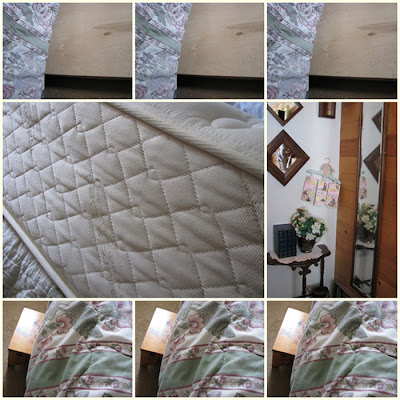 John's platform (top); my bench (below). The beautiful mattress in the middle and the impossible corner at right

How'd we sleep? Not very well. I'm a titch concerned actually. As we lay there staring at the ceiling last night, the ceiling's being so much closer to us now, John said, "I can feel my iliums."

"Stop talking that way," said I and rolled over to sleep.

We were still laughing about it this morning. I won't be laughing tomorrow morning if we don't sleep better tonight.
Posted by Vee at 4:07 PM