Eighty years ago, November 3, 1931, my grandparents were married in Moncton, New Brunswick, Canada. Of all the wonderful photos in my possession, I have not been able to find my grandmother's wedding photos. They show a bride dressed in the style of the day with a close-fitting cap and long veil and a wedding gown described as dual-level with the front at her knees and extending down gradually to full-length on the sides and back.

Several weeks ago, I won a giveaway at Karen's A Scrapbook of Inspiration. The offer was to create a piece of fabric via Spoonflower. If you've never visited Karen's blog, you really must brew a cup of tea and make a piece of toast with jam, and treat yourself to an event. I mean this most seriously. Nothing like it exists in Blogdom. If you enjoy magic, Narnia magic as Brenda would say, you'll enjoy Karen's Scrapbook. Needless to say, I was thrilled to win!

Working with Karen was delightful. She was so patient with me as I changed my mind and fiddle-flipped around. When we both had the piece just as we wanted, I asked her to add something more and she did. Without. saying. a. word. (She might've been saying a word on her end, but never to me. ☺) Thank you, Karen, for helping me to create something so meaningful to me and my family. It blessed me so very much.

Sometimes I get so ahead of myself...beep-beep-backing-up...this is the gift as I first found it sitting in the chair on the deck just outside my door. 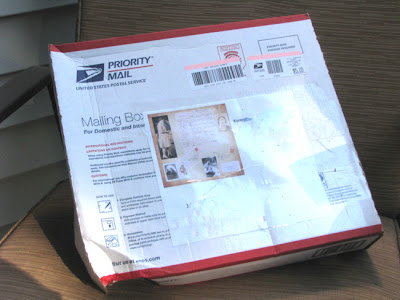 Notice the foreshadowing on the package...﻿ 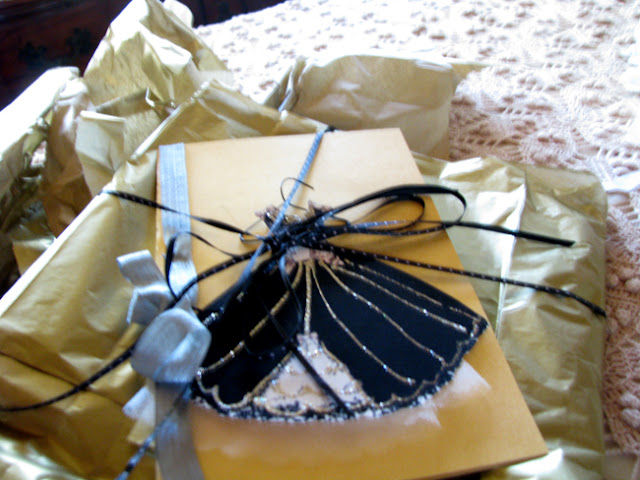 The exquisite card and gift 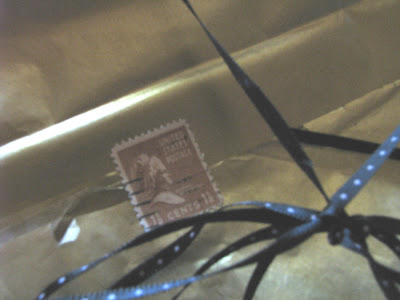 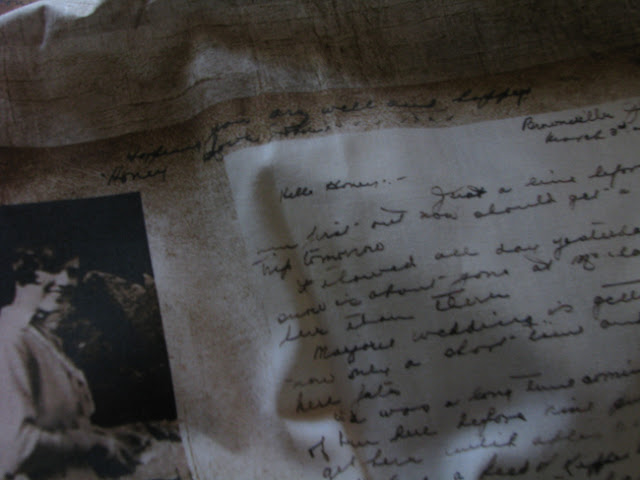 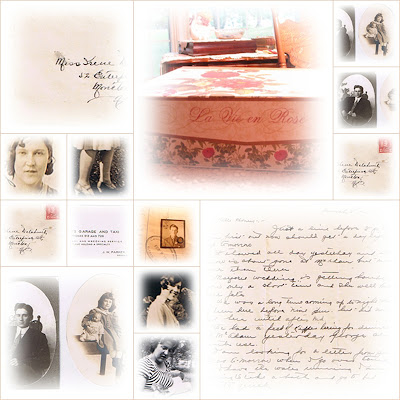 based on these images sent 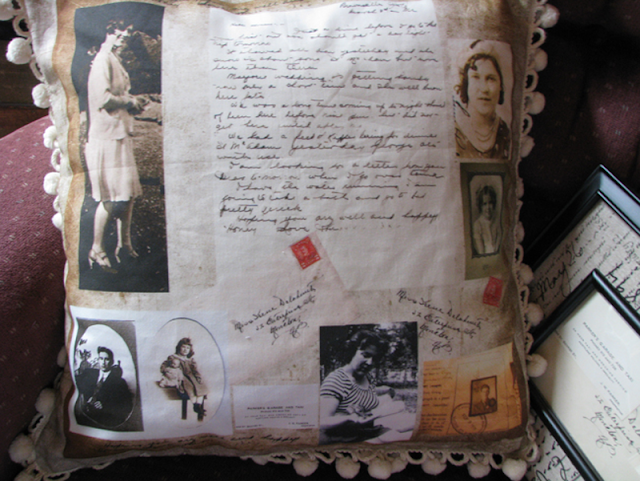 The final product~a gift for my sister's birthday

The pillow tells a story, which probably would only have meaning for family members. (I could be begged to tell more being the loquacious gal I am. < insert cheeky grin >) I have enough fabric to make more pillows and will get to my own pillow at some point. I also want to share the frame that I found recently at TJMaxx. It had the year "1931" on it and so I knew where I was going to save some of the ephemera I've always held dear...my grandfather's business card and an envelope in lovely script written to my grandmother. The fabric and the frame came together in the same week...a God-wink I believe. 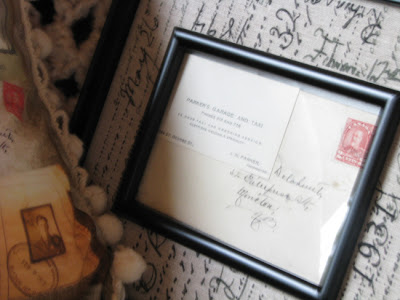 Not all of us are blessed with "things" that help us to remember so I am grateful to be blessed with such treasures. Most of all, I am blessed and grateful that my grandparents married all those years ago because three years and three days later, my beautiful mother was born.

Thank you for hanging in there and reading to the end; I promise shorter posts for the remainder of the week.

This wedding description is from a yellowed newspaper clipping re-found just this morning and typed up to document here. It is interesting and even amusing to read. It is also lengthy. I feel as if I could have been there.


Popular Moncton Young Lady, Miss Irene Delahunt, became the bride of  John W. Parker of Brownville, Me.
The residence of Mr. and Mrs Fred R. Delahunt, 52 Enterprise Street (unreadable) ...ding last evening when their only daughter, Miss Irene C. Delahunt, became the bride of Mr. John W. Parker, of Brownville, Me. The ceremony at eight o'clock was peformed in the presence of a large number of guests by Rev. Neil Herman, former pastor of the First Baptist Church here, who came especially from Halifax to officiate at the nuptial event.
The ceremony took place in the drawing room beneath a beautifully decorated arch of evergreens and Japanese Jack o' Lantern flowers of orange shade while large baskets of orange and yellow mums flanked the arch on each side. The staircase was also executed in similar attractive decorations and a feature of the bridal procession was the aisle formed by eight girl friends of the bride with wide white satin ribbon, on which were fastened colorful bouquets of evergreen and Jack o'Lantern flowers. As the ceremony commenced, they circled in on the bridal party forming a crescent (unreadable) each side of the arch.
The bride was charming in a beautiful gown of white satin, fashioned along Princess lines, and wore a bridal veil and a cap of Point d'Esprit lace, with the conventional orange blossoms. She carried a large shower bouquet of pink roses and lilies of the valley and was given in marriage by her father, entering the room to the strains of Lohengrin played by Miss Constance Cowan, while the latter young lady also sang very sweetly "Oh Promise Me," during the signing of the register. As the minister completed the ceremony the bride was showered with rose petals from a white satin bell which was suspended from the centre of the arch. Little Sheila Keating, daughter of Mr. and Mrs. Keating, was the only attendant making a very winsome flower girl in her pretty dress of pink organdie.
Following the tieing of the nuptial knot, the bridal party and guests repaired to the dining room where a delicious luncheon was served by the girl friends of the bride, Miss Marjorie Keith serving at the bride's table. Here again the decorations were attractively arranged, the color scheme being orange and yellow, with roses and 'mums predominating, while the buffet was banked with evergreens and baby mums. Centering the table was a huge three tier wedding cake, adorned on top with a miniature bride and groom standing beneath a floral arch. White satin ribbons were festooned from the electrolier to the four corners of the room and to the dining table. Rev. Mr. Herman made a brief but very pleasing address in which he extended congratulations to the newly wedded couple and wished them every happiness and prosperity on their voyage through life.
After receiving the congratulations and best wishes of the guests the happy couple followed by a large number of relatives and friends motored to the C.N.R. depot where, amidst showers of confetti and best wishes, Mr. and Mrs. Parker left on the Maritime Express on their honeymoon trip Western Canada and the Pacific Coast. On their return, they will take up residence at Brownville, Maine, where the groom is a well known locomative engineer on the Canadian Pacific Railway. For traveling, the bride was attired in a smart dress of black and white, with hat to correspond and wore a white fur.
The bride was for some years past a popular member of the district office of the Metropolitan Life Insurance Co. here, and the popularity she enjoyed was attested to in the large array of beautiful and handsome presents she received, including silver, cut glass, gold, cheques, china, chests of silver, oil paintings, linen, and many other fancy and useful articles. The bride was also the guest at several showers given in her honor prior to the nuptial event. The groom's gift to the bride was a substantial cheque. Both bride and groom also received many congratulatory telegrams from different places in Canada and the U.S.A. last evening.
Among guests from out of town present at the wedding were Mr. and Mrs. William Beaumont of Boston; Mrs. Parker and daughter, Inez, of Salisbury; Mrs. Chas. Delahunt and Mr. Lloyd Delahunt, Charlottetown.