Tell Me a Story

My grandmother was a great teller of stories. Not lies, rather the facts and impressions that shaped her world and the world of her parents and grandparents. It is a fascinating oral family history that I have loved hearing all my life.

For example, I know that my great-great grandmother died of typhoid fever. Serepta was her name. I know what she said as she lay dying, I know that she was the first cousin of the only Canadian Premier (Prime Minister) to hale from New Brunswick. I know, I know, I know so many intriguing tidbits.

My mother was a storyteller as well and so I think I come by storytelling myself quite naturally. Now whether anyone is interested in the stories... 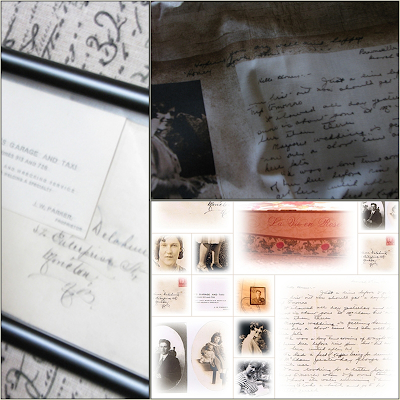 I'm feeling so Paul Harvey-like this morning. Here is the rest of the story behind *the making of the pillow*,  written about day before last, and a bit about my grandparents' love story as first told to my sister in an email sent after she had received the pillow, which did, as some have suspected, make her cry.


A few years ago, when I was giving Nan her baths, *I found a stack of letters tied with a ribbon on her side table with these words printed on the top: "To Be Destroyed."

They were the letters that Jack had mailed to her through the years and, when questioned, she'd said that they weren't anyone's business but hers. I asked Mom to do something, if she could, to rescue those letters.

So I was delighted to find a few...a precious few...among the letters and cards here. Somewhere, I even have the "to be destroyed" note.

Anyway, I noticed that Jack often used the phrase you see lifted out there to close his letters: "Hope that you are well and happy, Honey."

About two months ago, I entered a contest at a blogging friend's  blog for a fabric design. Incredibly, I won, which meant that I had a bona fide fabric artist create this fabric using the images I sent her. I wanted a way to tell the "love" story if you will. The letters turned out to be chatty descriptions of Jack's days and not so much about being "love letters" after all. (You will remember that Nan spent summers between the lake and Moncton and not home in Maine. Since he was a railroad man, Jack could meet up with her at either location.)

My friend was so patient with me as I kept adding this and that or taking it away. When she had it all done, I was still feeling that it wasn't
quite right even to the point of sadness and then I realized that it wasn't quite right because the pillow did not have any reference to Mom who, as their only child, was a huge part of their love story. So that's when Mom's little girl self got tucked in as well.

You probably remember the story of their courtship...how Jack owned the taxi service and picked Nan and a friend up for a dance the first evening and dropped them off. The friend was going to sit in the front, but he said that Miss Delahunt was small and would fit better. Then he asked her if she'd go out with him sometime and she said,"Why don't you call me and find out." Cheeky little gal that Nan of ours!

He made her an offer that she couldn't really refuse...that of being able to call for a taxi free of charge at any time. That's why I really wanted to get that business card on there because Nan was certainly pleased with that.

Then when they started going out, he was very impressed with her musicality and on their first date, he asked her to sing "My Pal" or "My Buddy" which was a song about a man and his son. (Very sad song...I know since she sang it for me sometime within the last decade while we were going through her sheet music one day.) He would repeat that request one September evening in 1951 just before he died and she sang it without breaking down. When someone asked her how she could manage that, she replied that it was the least that she could do for him.

I didn't include the older picture only because I couldn't find it in time for the fabric to be done. In the end, I think the younger photos look best. The young lady Nan would have been the right age for when Jack met her; Nan with the chipmunk was taken the summer Jack was ill. I included both passport photos just to get the link between Canada and the USA, which is so important in family legend and lore. That pretty much explains it, but if you have questions, I may come up with more answers.

The back of the pillow is made with the Irish linen that Sharon had me pick up last summer. It's kind of fragile, actually, so I doubled it. I thought that it would be a nod to Nan's Irish roots. I did the best I could with making it, but don't look too close because, since I sewed it, it is full of flaws. I did bind all raw edges in a hope to keep it around for a long time. And I made it so that it can be removed and washed by hand in Woolite.

Now I have enough fabric to make another for myself. Don't know when I'll get to it...


Since my grandfather John "Jack" died before I or my sister was born, we've always referred to him as Jack just as his friends and my grandmother always did. Interestingly, he always signed his letters to her "John."

And, of course, the story has many more tendrils as all stories do. Thank you for reading...

A happy and relaxing weekend to you!


*First discussed *here* and proving that eventually everything comes full circle on this blog.
Posted by Vee at 7:23 AM