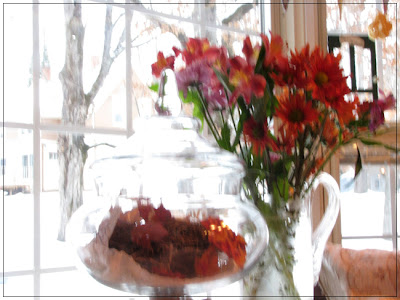 Thanksgiving 2011 is already a vague memory. Good thing I take pictures, bad pictures. Bad, bad camera. You may struggle to believe this, but these are the best of the lot. 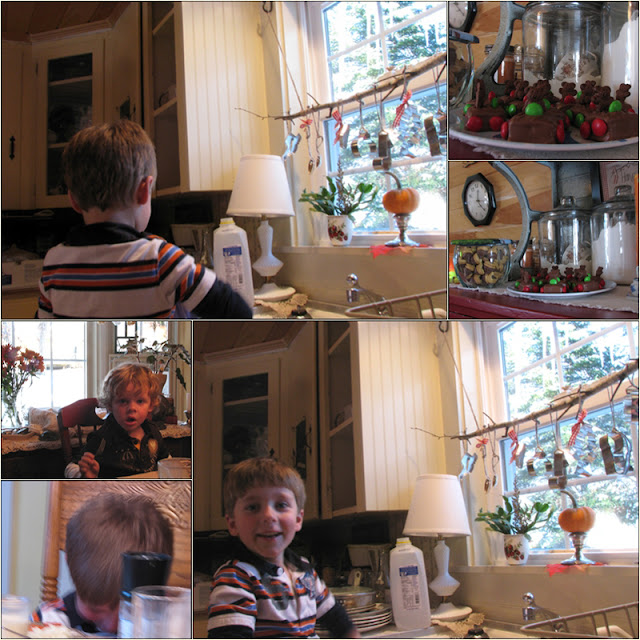 One thing I discovered very quickly...when I am the one pulling dinner together, there are few photo- taking opportunities. No pretty tablescapes once the sea salt lands on the table. Baby grand earned the red chair and was pretty content to be in the Turkey Seat. Two nights later we changed it to the Santa Seat and the oldest grand enjoyed it equally well. Speaking of oldest grand, he asked if he could do dishes. It's not something that his parents had yet entertained, but I thought it a splendid idea. He did an excellent job of washing pre-washed silverware. Catch them while they're young and while they think it's fun is my motto.

My daughter made the "acorns" and the candy cars you see in the upper right. Apparently, she's becoming a Pinterest fan.

After dinner, four of the most energetic ones went sliding while kitchen clean-up went on in earnest. 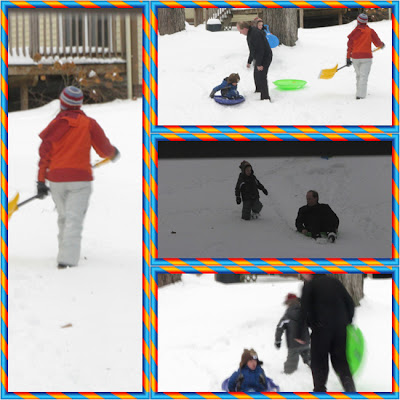 Had to punch up the colors with all that snow. They slid from 3 to 4:30. It was very dark by the time they came in eager for hot chocolate and more treats.

Yes, the tree is up; yes, I went Black Friday shopping =/ ; yes, I had a guest stay over one night; yes, I've been busy and so have all of you!

This I know because I've been visiting, even if I haven't been commenting too often.

I'm spending a quiet evening working on the Emergency Room Scarf that Suzanne shared *here.* I don't know what I'll do with my Monday evenings now that Dancing With the Stars has ended. I'm sure that as Christmas nears, it'll all get sorted.

A cozy evening to you!