Did you see the asteroid last night? My daughter called at 6:15 telling me that it was clearly visible to the right of the moon and that by 6:28 it would be at its closest point. That sent me scurrying for the tripod, camera, and a housecoat.

So there I was after dark on the front lawn snapping pictures when a group of teens walked by. (Some of the very same teens who have been on the wrong side of the law lately.) They looked at me kind of funny (I do not blame them for this. It's not every day that you see an old lady on her front lawn wearing a red housecoat taking pictures of the sky.) I said, "Some asteroid, eh?"

They started looking around...at least they were looking up...and I pointed them to the bright, bright "star" to the right of the moon.

"Oh wow!" they said and kept on walking down the street looking up at the sky. It was cute. 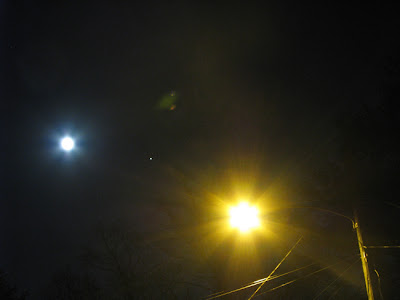 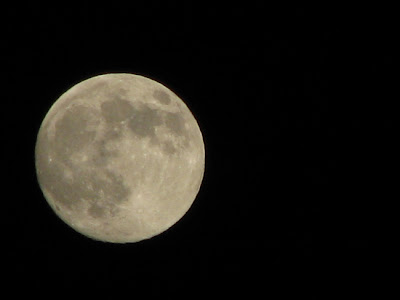 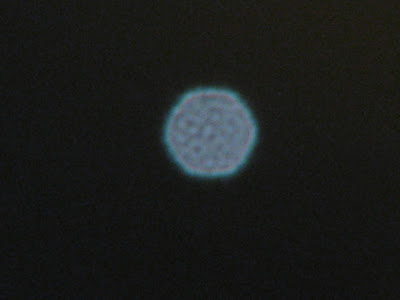 I'm not sure about this asteroid. I thought they were just chunks of rock, not six-sided golf balls dropping by. ﻿I may actually have to do some research: here, here, and here.

I STAND CORRECTED: http://www.skyandtelescope.com/observing/ataglance
Jupiter! That daughter of mine! And I am nearly hysterical thinking of standing out there on my front lawn for lame old Jupiter. Shoot. I have learned my lesson, thanks Christine!

More on yesterday's topic another day. There were nearly as many behind-the-scenes comments that I'd like to discuss (protecting everyone's identity, of course) and perhaps in the new year. We'll leave pretty Blogland to enjoy the holidays.