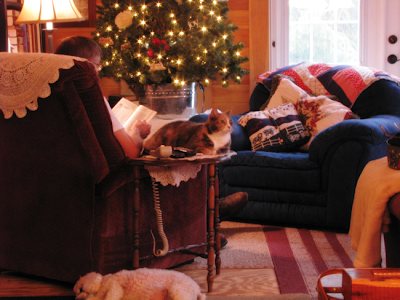 Don't you love cozy mornings by the tree? We do! Just prior to this photo, I had been sipping my coffee and working on the scarf mentioned in yesterday's post. Even Molly and Fioré show up for morning devotions. Molly's not always alert, but she's there listening to John's rumbly voice as he reads Our Daily Bread. Doesn't Fioré look particularly angelic? =)

Everything at our haven is in a state of not quite accomplished. The tree is up and needing more decorating. That tree is what made me brave life and limb on Black Friday. It's a slim, pre-lit tree, which doesn't impress me that much. There aren't enough lights, but the weary among us are quite happy with the status quo. The grands gave John and me a bit of a hard time with our *wee table tree last year.* The former tree is very tired, after nearly 25 years, and so it was time to upgrade. I get the distinct sense that this new tree is not much of an upgrade. It is quite high at 9 feet above the floor, enough to impress the grandsons.

While tidying up the laundry room this morning, I found the box of old mittens. Some pairs and lots of singles. I never could toss all the little ones that my children wore. Some are my nieces' mittens; one pair is Nan's; another pair is mine from college days. They have lots of stories to tell I'm sure. My mother single-handedly kept her grands in mittens, at first knitting them herself and then buying them at church bazaars. She would say that she couldn't do any better and the price was right.

This morning, I began to think what I might do with them. There are mitten drives these days, of course, though my mitten stash is too near and dear to my heart to let go. I'll purchase a pair of mittens for the drive. Since I was already crocheting, I simply crocheted them onto a chain and strung them in the bay window. It's not done...perhaps some greenery to add. Anyway, you know that I'll show you again when it is done. 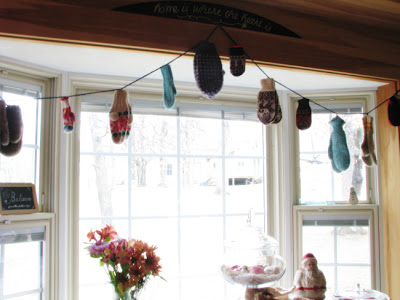 Oh, do look and see what has happened to the foot of snow that arrived last Wednesday. 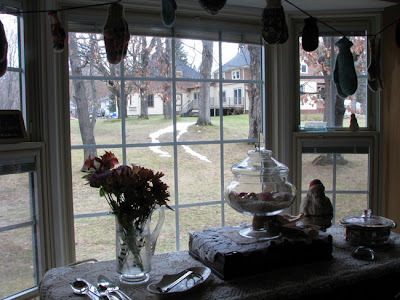 Nearly gone! Those two tracks there on the hill that look like a driveway are the snow trail the kids made last Thursday for their sleds. Crazy weather and we are not complaining.

Just as I was finishing up with the mitten garland, I heard John's tread upon the stairs. Except the footsteps stopped at the door and I heard a knock. When I opened the door, there stood a man with his arms crooked and two wreaths hanging from each. He told me that I was the first to answer the door this morning. He said that his mother was making wreaths to sell so that she could buy her grandchildren Christmas gifts. He explained that the wreaths were very fresh as they had just been tipping Sunday afternoon and his mother had made ten wreaths yesterday.

They were indeed fresh and wonderfully fragrant and I could not have done any better and the price was right so I purchased one to hang upon my door. (It's not "done" either, but I'll show you once it is.) 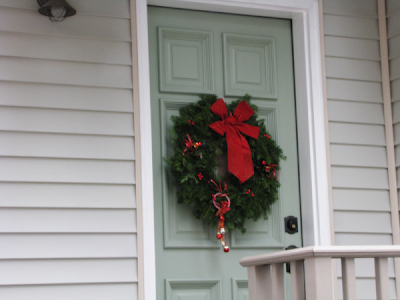 "Merry Christmas! God bless you!" the man called as he walked back down my drive to his car.

Merry Christmas I called back and to your mother, too.

Have you shared Christmas greetings yet? It doth warm the heart and cheer the soul!