Why, hello! I've so missed time spent in Blogdom. I wish that I were on top of the housecleaning and therefore reporting from a clean domicile. I can keep right on wishing. ☺

So we last spoke when I mentioned that I had to baby my back... Yes, well, troubles with my back can be traced to my fourth year when curiosity overcame me and I ignored my great-uncle's warning about that cardboard in the bottom of a hall closet. I stepped in just to see what would happen and found out quickly enough when I landed in the basement sitting upright. For some reason, I couldn't breathe. It seemed like forever before anyone arrived. When they did, my father set me on my feet, patted me on the back, and my lungs filled with air again.  Phew! The adults watched me carefully and announced that I was right as rain, though my back has truly not been the same since. That's what I get for being a disobedient, not to mention stupid, little girl. I have further scars through the years also won during times of folly; my suspicion is that we all do.

For all you other sciatica sufferers, I found something that really helps me relieve the discomfort. The previously mentioned frozen gel pack and sitting in a recliner with my knees higher than my hips. I do this three times a day for fifteen minutes at a time. It doesn't take away all the soreness, but it sure is a blessing to get some relief. At least, I can walk upright. I think at the earliest twinge I shall do this and pray to head off future episodes. (Oh, I really didn't move any furniture other than the china cupboard. The Volkswagens remain as they were.)

But enough about me. Because there's been much bigger and happier news this week.

John is delighted to have one of his eye surgeries done. He wears a big old smile that lights up the place and is audibly praising God at every turn. Cataract surgery is something of a marvel and to see how quickly he has rebounded and is reading and noticing everything. This morning he counted 27 spills on one of the Eastern spruce tree branches just because he could. Before, it would have all been a green blur. It's quite interesting being his driver as he usually is mine. If I had only known how little he was seeing...ahem. He read all the street signs and all the speed limit signs. Let's just say that his not being able to see so well explains a lot.  ;> And he also noticed a sign of spring—8 days until our favorite ice cream shop opens! 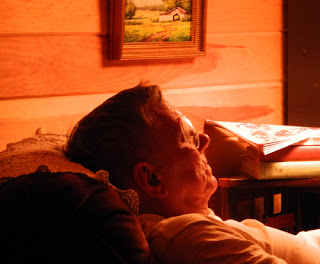 There are other signs of spring. The maple sap buckets showed up last week, though we are told it will be a dismal year for maple syrup. There have been a few robin sightings, the forsythia branches have been brought in to be forced, and there's a general feeling of well being. Though the winter was not harsh, it was long, and we are ready to say goodbye. Tonight we'll turn the rest of the clocks ahead an hour and welcome more daylight at day's end. Things are looking up! 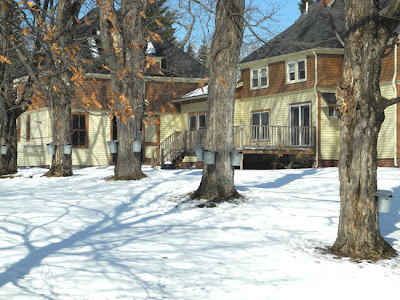 Hope to visit you soon. I have missed you.