Now ordinarily some of the time, I do not resort to name calling. However, there is a nightly occurrence in my neighborhood that has brought out the very worst in me. It began a few weeks ago and appears as if it will continue right through until forever. My state made the unfortunate decision to legalize fireworks and now every tom, dick, harry, sally and sue have become munitions experts. The blasts begin just after sundown and have gone on all night long, though we're told there is a 10 pm curfew. I hate nightly fireworks. Hate is actually too soft a word. I despise nightly fireworks and I don't feel too saintly about those who are setting them off either. Are fireworks legal in your community?

So, yes, you'll hear me use an old Downeast term at the end of this short video. You can find it in E.B. White's essay entitled "Maine Speech." Yes, it means just exactly what you think it might.

Onto cheerier things — I have a parade to attend today. The grands will be marching and we'll be there. One is wearing the uniform — t-ball uniform; the other is carrying a sign for a local pizzeria. Gotta see that... (If all goes well, I'll be popping in a few photos before day's end.) 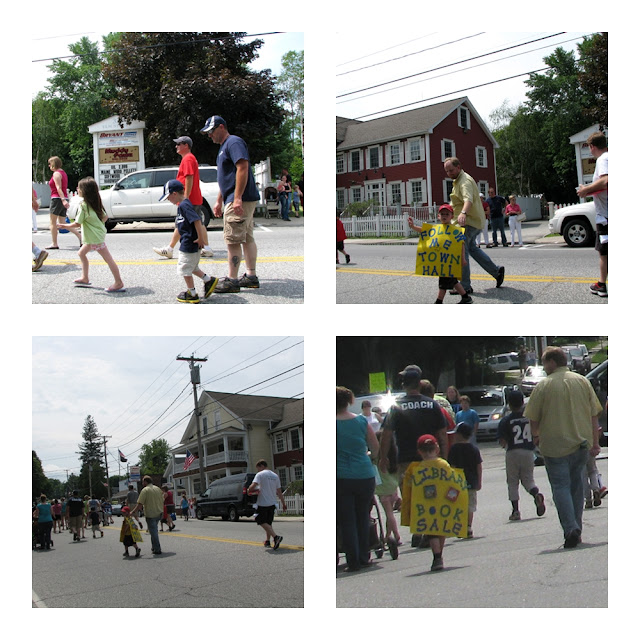 Grand 1: Still dancing I think
Grand 2: Spotted us and wanted to stick around longer, but the Library Sale job was too important. (And I thought it was all about pizza!)

And don't you just know that we'd follow that cutie pie anywhere. In fact, John is off to the sale right now. He's hoping that he gets some more great deals as he has in years past.

Have a wonderful weekend!