Who Knew a Near Death Experience Could be So Much Fun?

I want to document my weekend. It was wonderful, including my near-death experience.  < insert another cheeky grin >

First up — baseball. At one point during the game, I turned to my son and suggested that a professional team do a spoof pretending to be five- and six-year old t-ball players. It would be a riot! I giggled myself silly throughout...hope that Sam didn't catch me at that too often.  When the coach said: Okay, everybody grab your caps and gloves and a little guy asked, "Why? Where're we going?" I thought I'd split. Oh my! They were all just too cute for words. 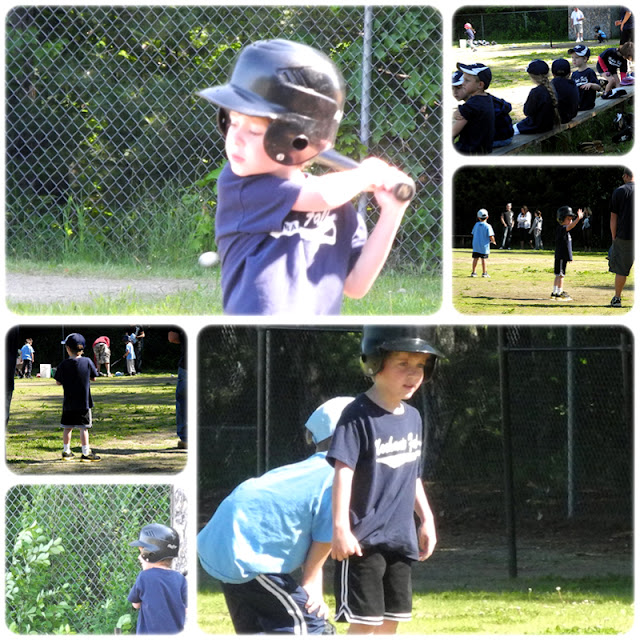 Now my own grand was the most animated child on the field. He's included some dancing in his game. He did get hits and he did stop a ball and get it to first base in time. Did I capture any of this? No, only the dancing. Just take my word for the rest of it. Some day, he's going to be so happy that I was documenting his childhood. =D

After baseball, Sam thought it would be great to join me; however, I had lawn mowing and planting flowers on the docket. So we struck a compromise instead: I'd take over ice cream sandwiches in the afternoon and visit for a bit.

One thing led to another during our visit and pretty soon we'd I'd made plans involving a pizza picnic supper at "the farm." 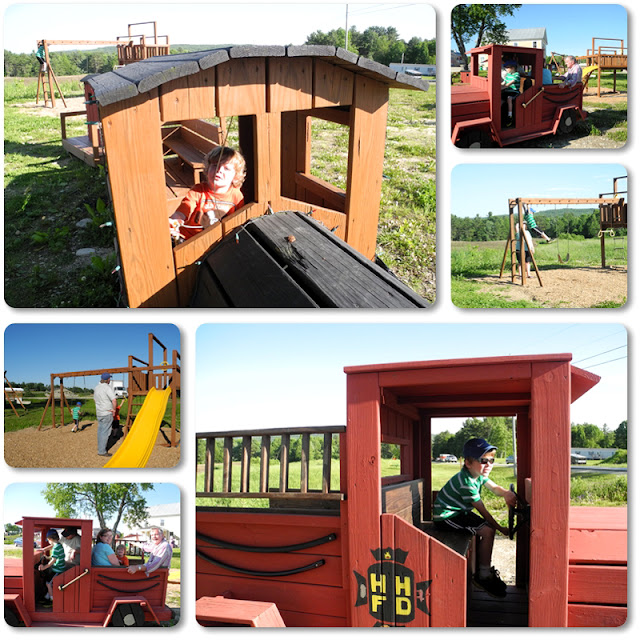 The guys enjoyed the playground. Note the gang being driven off in the bottom left corner.

Would you believe that we lost Jake? Lost him while clearly watching him. It was bizarre and I have a new appreciation for how quickly a little one can go missing. This video documents the entire experience.

~Let's Get Out of This Tall Grass!~

By now you're probably wondering if I forgot the near-death thing...no! I don't think I could ever forget it.

This is how it happened: I was eating a very dainty piece of pizza. Oh stop that! It was so, too. Anyway, I was eating pizza when a car drove through the parking lot stirring up a lot of dust. I stopped breathing that I might not inhale said dust and the next thing I knew I couldn't breathe nor could I speak. John and Michelle were chatting and my son and the boys were playing at the swingset. I was in trouble so I got up from the picnic table turning my back to them so that I could cough and sputter all ladylike and everything. Finally, I thumped myself a good one in the chest and dislodged the offending piece of pizza. I took a big breath and returned to the table rheumy-eyed. I wasn't going to say anything, but decided that it would be a good life lesson for the chatters to know that I had truly been in trouble.

I explained and they both looked at me wide-eyed. John apologized. Then Michelle said gently, "Don't you have the responsibility to let someone know you need help? You should have banged on the table!"

Point well taken. It was a true life lesson for me. If you're in trouble, say so and, if you can't talk, bang on the table!

Okay, let's get out of this tall grass...