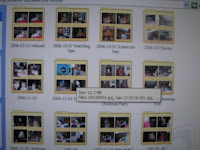 These photo memes can be so much fun and now I've been tagged by Leah at South Breeze Farm to do one.

This one is about the sixth picture in the sixth folder. Lemme see, ah yes...that folder will work for me and the topic is the first grandson...then 11 months old and soon to be three years old. The date was December 2, 2006.

So this is the sixth picture as he's being removed from his jacket... 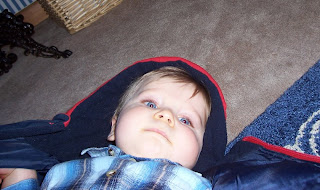 But you didn't think that I could post only that one, did you? I mean the camera/s have been smoking ever since that child's birthdate nearly three years ago. This nonni has hundreds of pictures and if you're a grandmother, too, you are nodding right now. I took 29 pics that day and here is the 29th one...I was getting better at it by then... 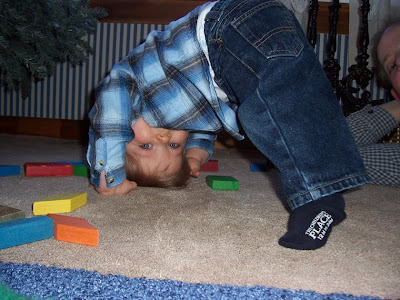 Here's a little organizing tip from a photographer that may help some with maintaining photo files. He suggested to name files according to the date first. For example, this one is labeled 2006-12-02 with the year first, the month, then the date. From there you can go on to name it more specifically, but this way all files will come up in a logical progression of order. Now I see that I must get 2006, 2007, and 2008 copied to disks. Ackkkk!!!

I'm supposed to tag six bloggers, but you may play along if you wish. Just let me know so that I can visit and see what you discovered.

Have a happy Saturday and a relaxing weekend!
Posted by Vee at 5:30 AM