So it's not a picture of painted ponies, but since "The Pharoah's Fury" featured prominently in my day at the fair and since I didn't take my camera to the fair to take a photo of it myself, I'm using an image from the Web...

Speaking of web, did anyone know that Charlotte's Web by E.B. White is based on the Fryeburg Fair? It is. Scout's honor!

Some years we can't wait to get to the fair; other years it's not so important. I personally believe that we return to the fair once the memory of bad eating choices has worn off. Oh my! The things I indulged in yesterday. I shall just list them in order of their consumption: blooming onion, french fries, iced tea, mini-donuts, a giant donut, coffee, a deep fried oreo, a chunk of deep fried whoopie pie, a lobster roll, and a piece of Snickers fudge. All the aromas of the fair kept tugging at me and I had no more willpower than Templeton the Rat in the aforementioned book. Oh, I forgot the maple cotton candy.

We did all the usual things except for rides. The only reason that "The Pharoah's Fury" features prominently is because one in our party repeatedly became lost and that particular ride became our meeting place.

We attended a wreath making demonstration and purchased enough material, minus the balsam tips, for eight wreaths. Somebody was feeling ambitious! We attended the flower show and learned a useful tip for holiday decorating, which I will share at a later time.

We wandered through the animal barns, which were aromatic. As a friend of mine would say, "Nothing like the sweet smell of horse manure and pine needles." Personally, I don't think much of that particular odor, but he insists that it would make a wonderful aftershave. He's obviously a nut.

We watched harness racing, horse pulls, the powder puff oxen pulls where the women were in charge of the teams. My niece and her friend found that the most fun of all from the sounds of their parody of said events on our long ride home.

But I wasn't there for any of the above, I just wanted to see Patti Page who was the featured performer of the evening. She of "How Much is that Doggie in the Window" and "Tennessee Waltz" fame. My earliest memories of her are from her picture featured on sheet music that sat on my grandmother's piano. Last night Miss Page was in fine voice singing before an extremely large crowd...standing room only. (I was one of the chain link fence huggers.) I learned a few new things about her last evening and one is that she's in the maple syrup business as she and her husband own a farm in New Hampshire where they harvest maple syrup.

Here's a picture of my little stash of goods and souvenirs... 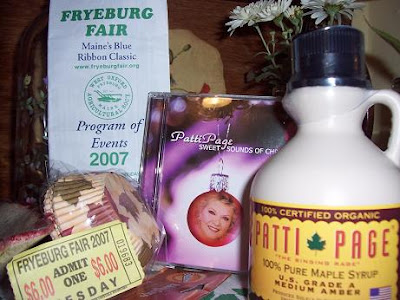